A tradition of mine now for the last three years is to take my birthday off and go walking with Alex. Whilst previous outings have concentrated on a high SOTA summit I thought this year we would attempt a few Wainwrights in one day, and settled on the Langdales as a good compromise with the time available.

The route we ended up taking was from the Dungeon Ghyll hotel towards Dungeon Ghyll Force then up on to Harriston Stickle from the west. We then traversed across to Thunacar Knott and finally on to Pavey Ark before descending back to Dungeon Ghyll via Stickle Ghyll. 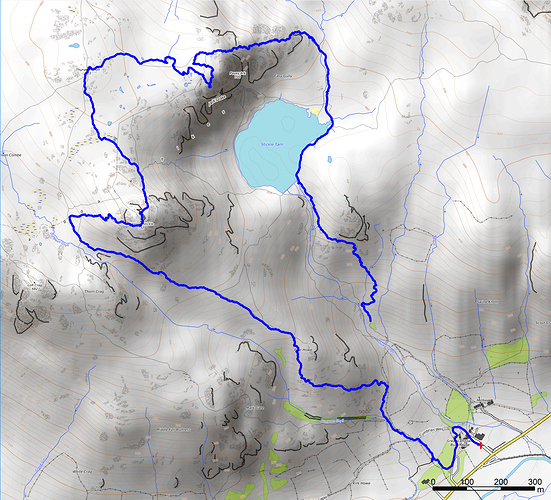 I had indicated my intention to activate all Wainwrights using HF but that was not to be as the weather was against us. The temperature at the top was 5 degrees centigrade but with the wind at around 10-15mph from the North West it felt around freezing. Alex was with me and she was struggling with the cold, so the diplomatic decision was to leave the HF in the rucksack. As it happens Geoff GM4WHA was able to get me on 2m from each of the three Wainwrights we activated, so all good on that front.

This was the first time out for my Garmin Virb Elite action camera which also records various interesting GPS-derived stats and can be paired with a heart rate monitor and external temperature sensor. 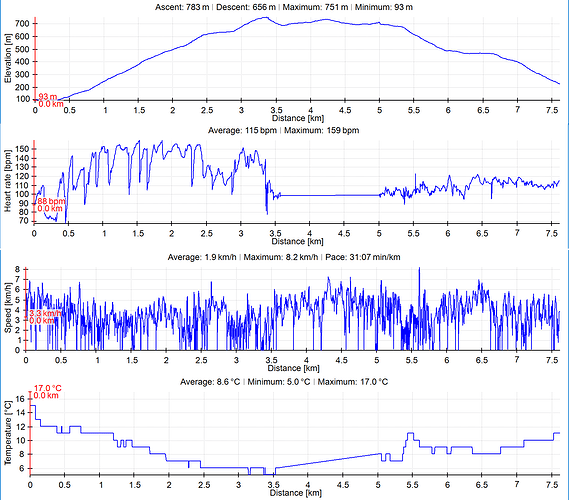 What I found interesting here was my heart rate reaching 159 bpm on the ascent and that the temperature was much warmer than it felt in the wind!

Once we got on the right track (we ended up going through the national trust car park before getting back on the Cumbria Way. I was joking with Alex at the time that on my last visit I had to direct a runner back down from half-way up Stickle Ghyll that he had missed the Cumbria Way and needed to turn round - and here we are not even getting on the right track within 10 metres of it)! Anyway, a small mistake which was easily corrected by the lucky presence of a gate at the top of the field we eventually ascended through. 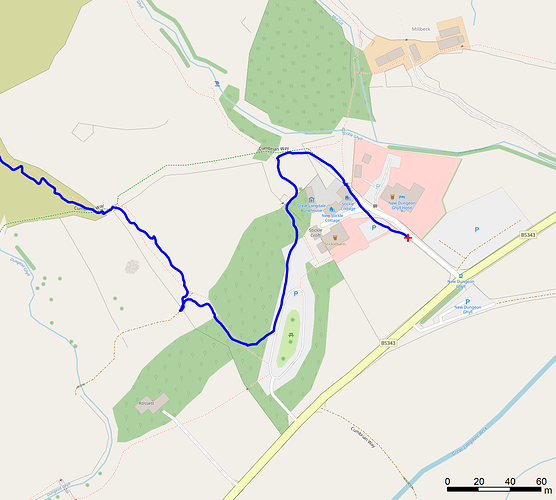 The track quickly parts from the Cumbrian Way and is a well worn path up towards Dungeon Ghyll Waterfall. 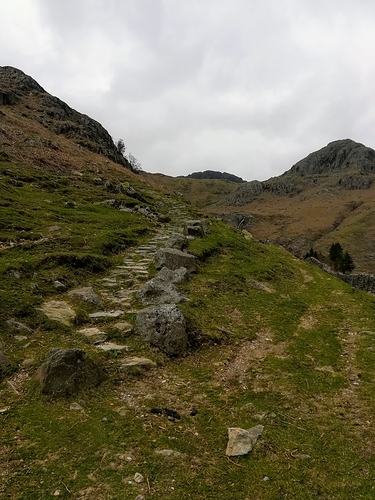 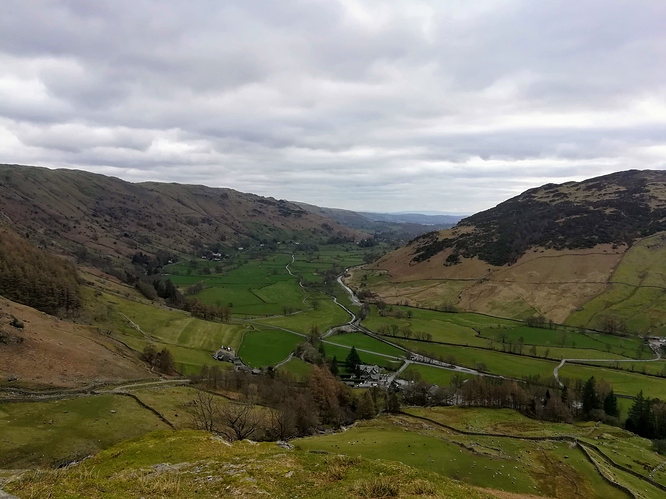 As you reach the waterfall the drop off the left-hand side is a little scary in places - I wouldn’t want to be on this track in poor visibility! 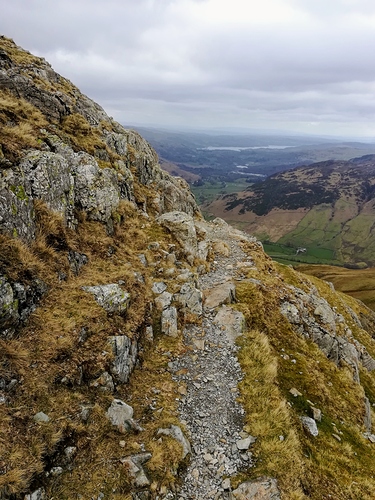 I was surprised to find that both Dungeon Ghyll and Stickle Ghyll were very quiet. 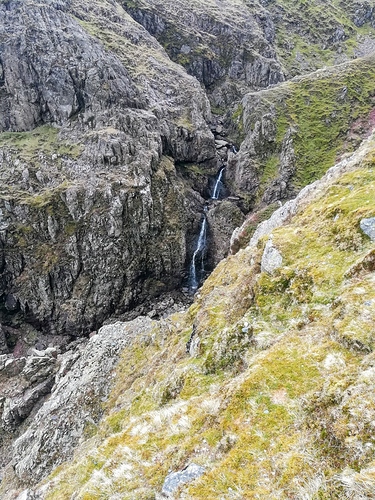 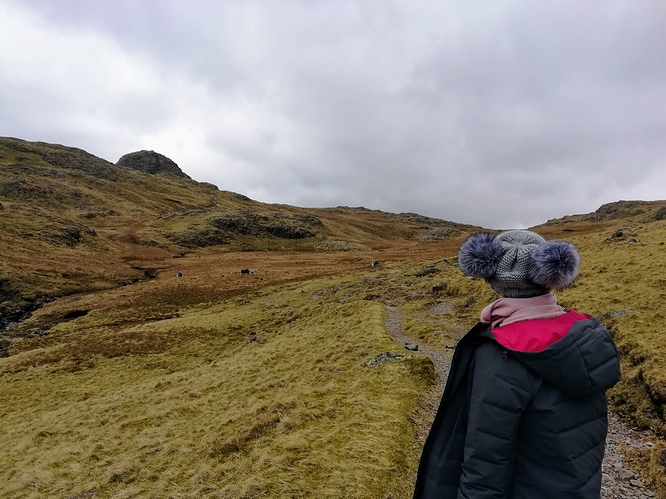 The final push on to the summit of Harrison Stickle is via some rock traverses but nothing too nasty. There is a nice snug right off the summit (as seen below with Alex hunkering down!) 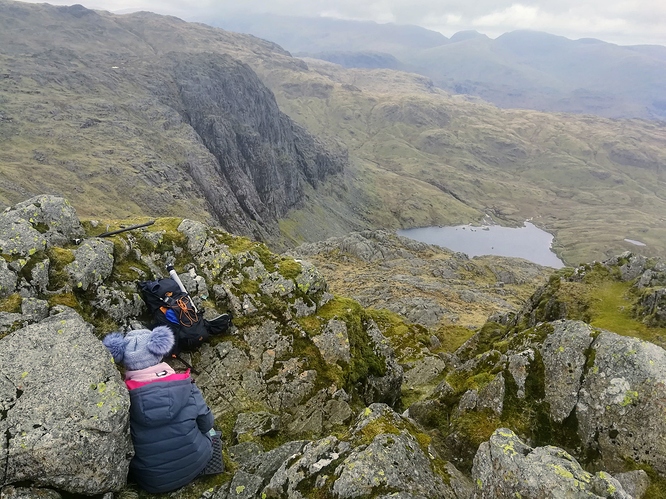 Great to get Derek first in the log. I was using the FT1XD with a Diamond RH-7700 extendable whip antenna. Geoff was a good contact from Annan. HF would be tricky from this summit with my SotaBeams QuadBand dipole.

At the end of the activation I managed to bag a SOTA chase via a contact with Steve 2E0WCG/P who was on Great Whernside. There was a bit of frequency to-and-frowing but we go there in the end once I’d upped power at my end.

Looking at my activation announcement, and my watch, I made the executive decision that Loft Crag and Pike of Stickle would have to be left for another day. If I were to do this route again I’d probably go for Loft Crag first, ascending on the Westerly side of Dungeon Ghyll. This would make a more natural route - rather than having to ascend Harrison Stickle and then descend by the same route back towards these two. As it happens given our time constraints we probably did the right thing today going straight for Harrison Stickle.

I don’t think we followed a defined track down from the summit of Harrison Stickle to pick up the path to Thunacar Knott and indeed there was some boggy traverses to be carefully navigated. It probably only took 20 minutes. Thunacar Knott itself is a bit of an indistinct bump and it is fairly exposed.

A good set of contacts again from Thunacar Knott, including a quick call from Steve who was now on the descent from his SOTA activation.

Negotiating some boggy ground again the traverse to Pavey Ark takes a bit of zig-zagging to avoid the worst of the wet ground. The summit of Pavey Ark isn’t as scary as you would expect looking up from Stickle Tarn. There is a ledge around 5m down from the summit which save the activator from the worst of the vertigo. 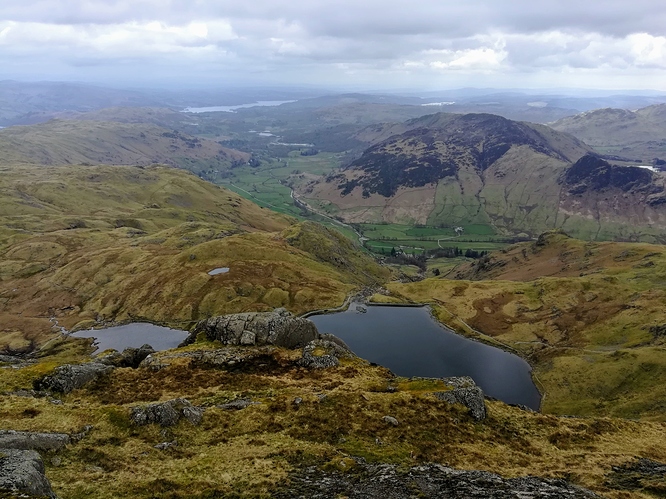 Alex didn’t join me on the summit for long and tucked herself away lower down on the anticipated route back to Stickle Tarn. At one point whilst working G4ZRP I dropped my pencil which rolled a fair way down the rock face towards the ledge. Only that morning I’d taken a pen out of the top of my bag “I never use that pen”. Oh well, a little slipping and sliding later I’d retrieved the pencil and continued!

We met a few groups of walkers on the South-Easterly route back to Stickle Tarn. There was a tricky section negotiating a chunk of snow that was on the main descent route: 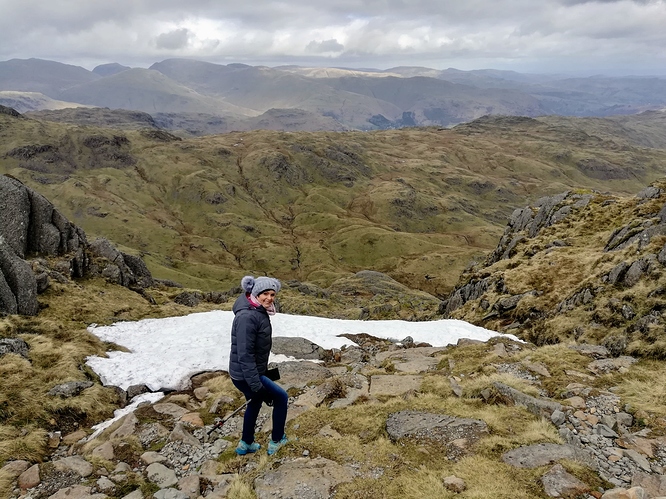 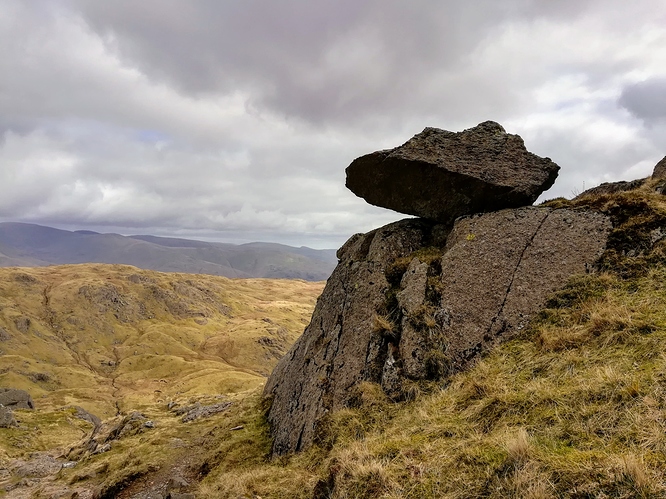 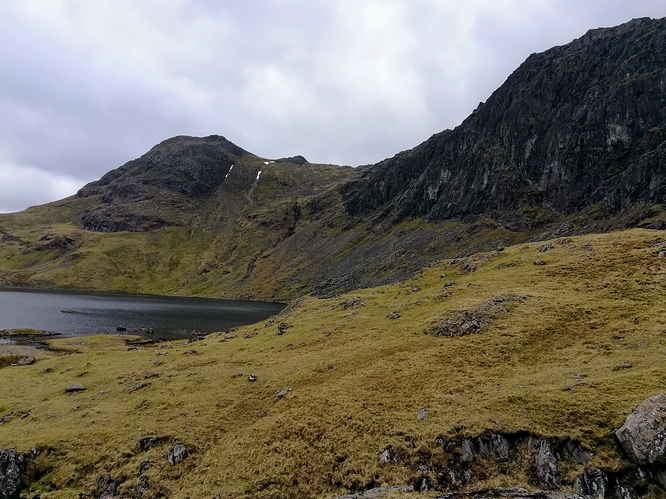 We came back down the Easterly descent relative to Stickle Ghyll which is a longer path and not quite the stone staircase on the Westerly route. I’d not been down this side so it was a nice change and we noticed rock climbers up on our Easterly side with ropes deployed. 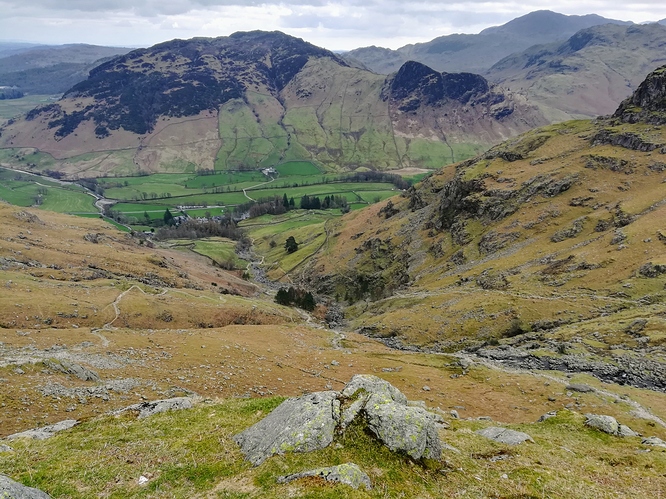 We had curry and flatbread at the Sticklebarn, with a pint of Keswick Brewery Thirst Quencher which really hit the spot, before setting off to pick the girls up from school.

Thanks to all the chasers, much appreciated!
73 M0NOM

Sounds like a great birthday walk that Mark! I’m hoping to do a similar round and include Raise onthe SOTA LD Weekend. It’ll help give WOTA some exposure as well with the SOTA guys out there activating. Not sure we’ll get around the whole circuit though with the current level of fitness.

The camera / GPS / heart monitor is an interesting piece of equipment. You have a good engine!

Sounds like a great idea Phil, and to complete the picture (no pun intended) I’ve uploaded a short video to YouTube.