I was last on Crinkle Crags (my first visit there) this time last year on an evening activation. This time we had a fantastic day to explore the Crags and venture further afield to Bowfell. 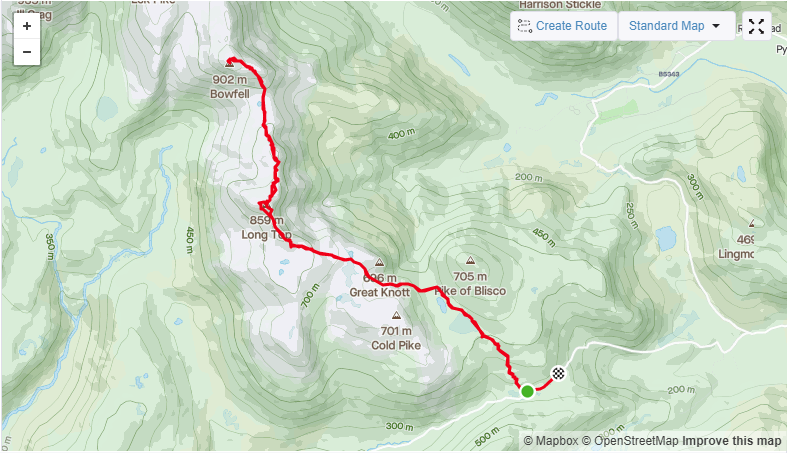 With glorious weather forecast, and thankfully not too hot (especially once a bit of altitude was gained) we set off for a parking spot at the top of Wrynose.

As we avoided the traffic between Windermere and Ambleside once again by taking the scenic route up to Kirkstone Pass and back down the Struggle I thought several times of picking an alternative destination given the tourist situation. In the end it wasn’t too bad on the road up to Wrynose Pass traffic wise.

On the pass itself we struggled to follow a ‘pass noob’ who insisted on ascending in first gear. If it had been wet they would have learnt the hard way why that is a really bad idea!

I was also concerned about lack of parking but the top of Wrynose does have several options. I was fully prepared to park down the pass to secure a place but we managed to tuck on the end of the two spots right next to the three-counties stone.

On our last visit here with my wife and eldest daughter we turned right after Red Tarn and went up Pike of Blisco - a summit which affords amazing views for relatively little effort. At the time Crinkle Crags, turning left, would have been a bad idea as we would have run out of daylight. We vowed to return. 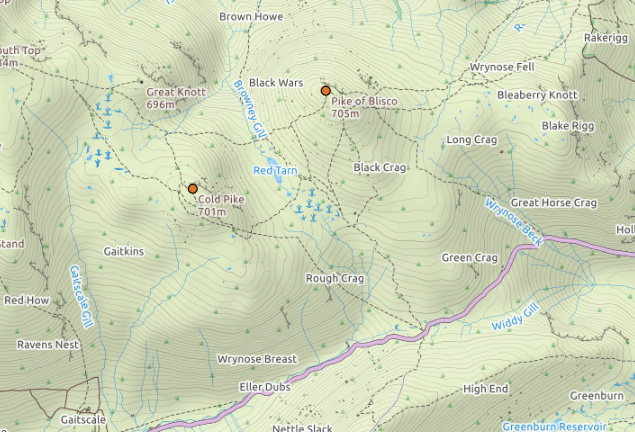 As you crest on to the ridge line the view to the West opens out with excellent views to Scarfell Pike with the Isle of Man beyond. 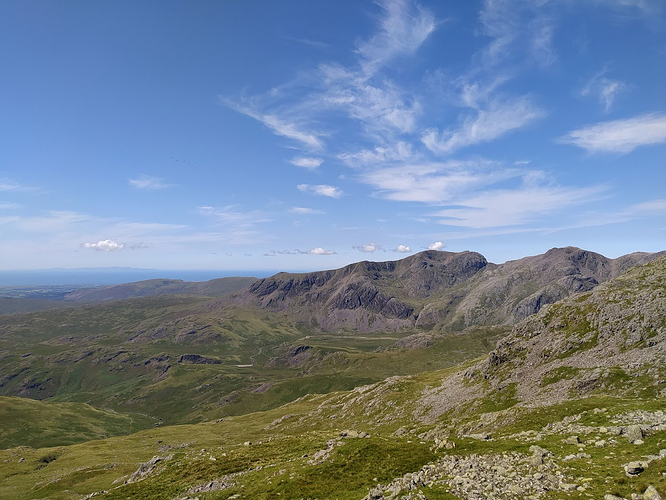 Once over the first Crinkle the second, larger one comes into view. We approached on the Westerly side and I initially did a 2m activation, before moving on to HF. As I had forgotten my BNC to SMA adapter I didn’t have the option of using the Slim-G antenna so it was stock whip on the FT1XD only! 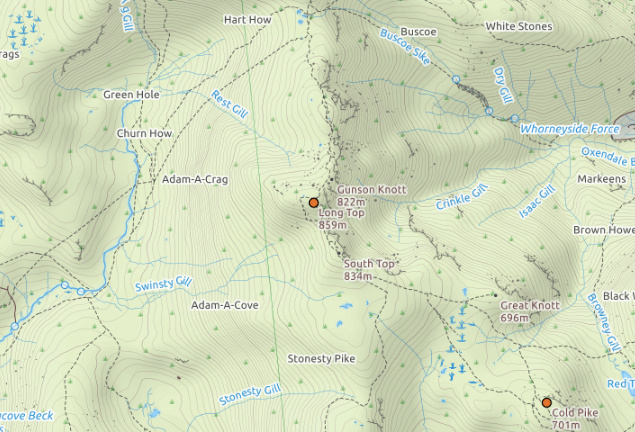 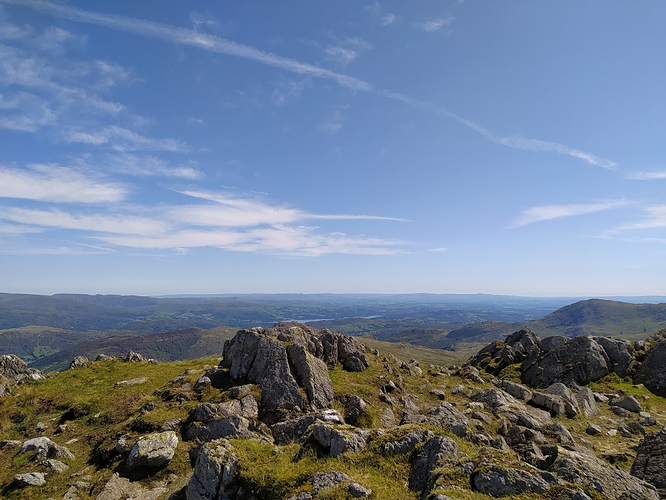 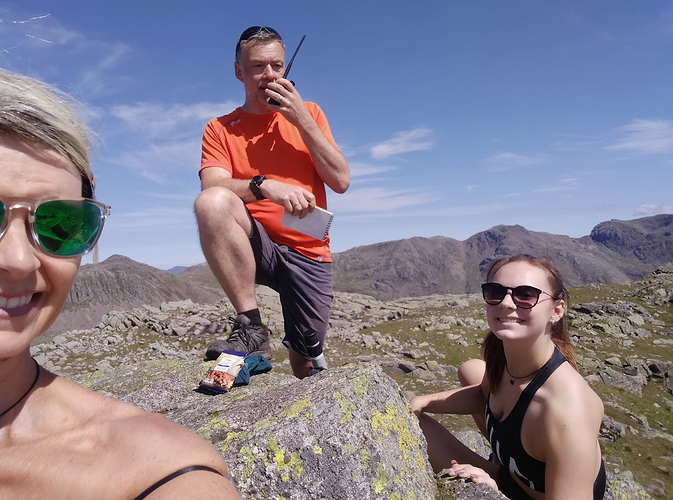 First in the log was Sue followed by Mike who was portable in Morecambe. Then it was great to hear Karen 2E0XYL - apparently back to the radio after a long break. You’ll know Karen because she had her photo on the WOTA front page for a very long time having completed all the Wainwrights.

Once 2m dried up I set the HF equipment up a little away from the summit - basically on the nearest long flat section - the 80m dipole taking up quite a chunk of land! I got an interesting set of contacts, especially nice was to get Ian GI0AZB/P activating a summit in Ireland with his wife Esther GI0AZA/P - she was operating on 40m which unfortunately was too long a skip for a contact.

At the end of HF, once packed up and about to set off, I got G7KSE/P in the log who was on LDW-122 Starling Dodd and travelling along the ridgeline towards Haystacks. It was to be the first of three, someone miraculously timed, WOTA Summit to Summits of the day between us!

Alex and Raine indicated they would be up for extending our original plan to include Bowfell. We had history here - on a week off work with terrible weather last year I decided we’d try for Scafell Pike on the last day. The approach from the Langdale via Mickleden Beck was fantastically over-optimistic. We got as far as Esk Hause - with constant rain - and decided better of carrying on.

I’d inquired of two walkers approaching the crossroads from Bowfell what it was like, but my spider-senses tingled as we set off in that direction and I decided better of attempting it. Having been there now I know that was 100% the right decision. Bowfell is a very rocky summit and I wouldn’t have fancied that in the cloud and rain.

The walk to Bowfell from Long Top took just shy of an hour. On the bottom of the drop, before the ascent of Bowfell, you come across the magical Three Tarns, one of which is like an infinity pool, a real treat for the eyes. 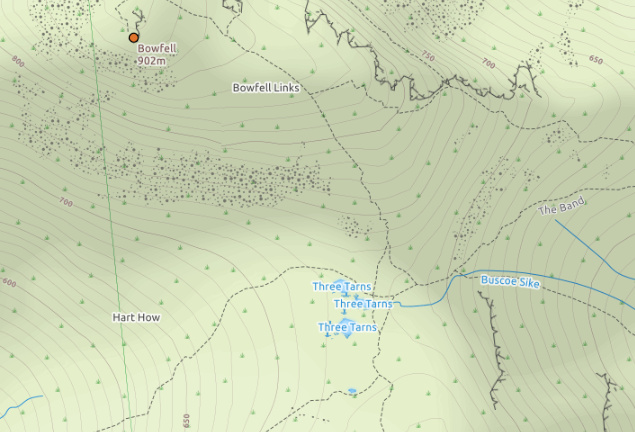 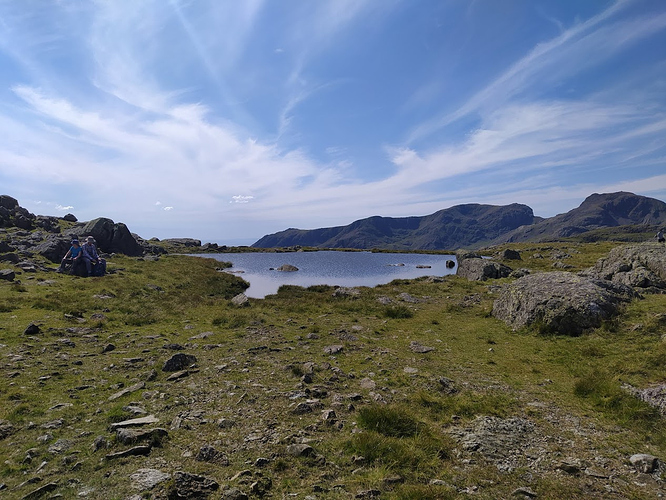 On the way to Bowfell we spotted two Paragliders who were clearly having the journey of a lifetime. Paragliders can be spotted regularly in the vicinity of Blencathra as there is a school there, but I have never seen them traversing the summits as they were doing today. Heading South they were last spotted on the way to Wetherlam. 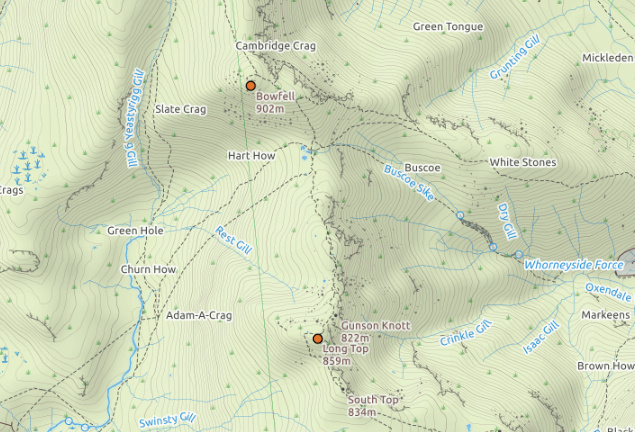 It was clear straight away given the rocky nature of the summit that there was no chance of HF with an 80m dipole. So the activation was via the FT1XD again.

This time I remembered to do C4FM, as I had promised on the last summit! The second S2S with G7KSE/P was made as he activated the SOTA/WOTA summit of High Stile

After a quick photo session and a snack (not helped by the swarm of flying ants that was being blown around the summit!) it was back off down the boulders again to reverse our steps. 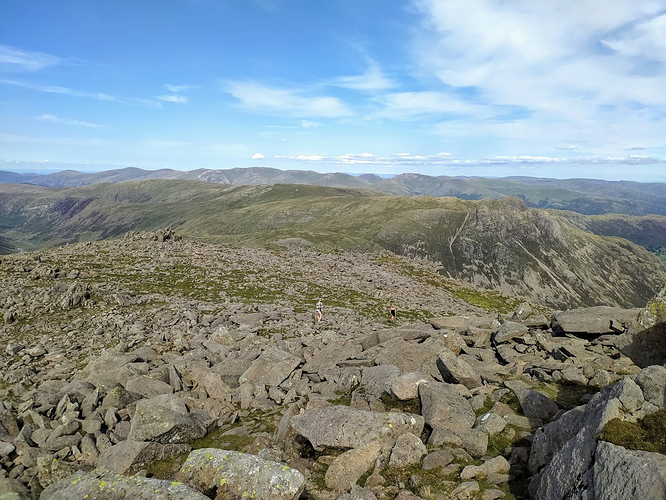 The forever up-and-down as you traverse the Crinkles really hit home on the way back, although there was a point where the Isle of Man really popped out in the distance. 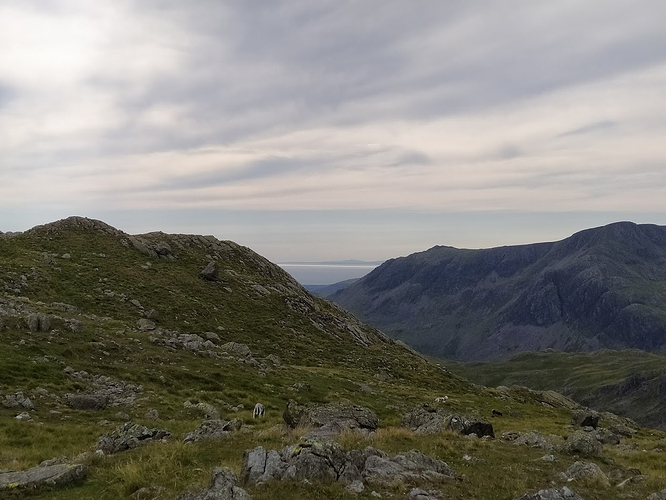 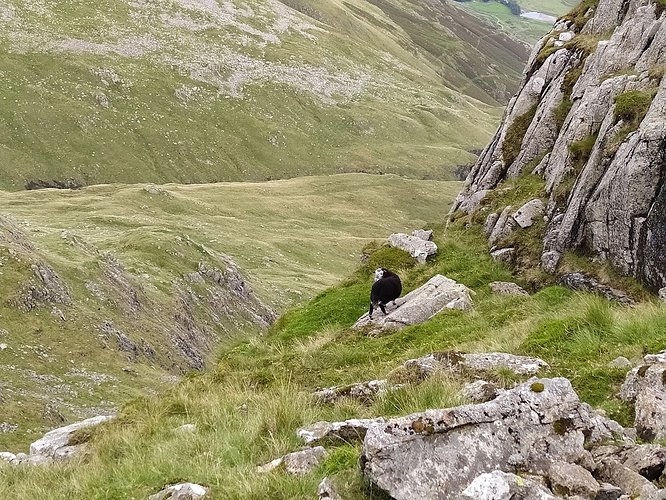 Then, as in my last visit, somehow we managed to pick the Easterly path between the two crags and ended up at Bad Step, once again by pure accident, although I thought Alex and Raine would probably enjoy the challenge. It takes a little bravery, and some careful footing to traverse the rocks down, but you do get an immense sense of accomplishment afterwards - only equalled by relief! 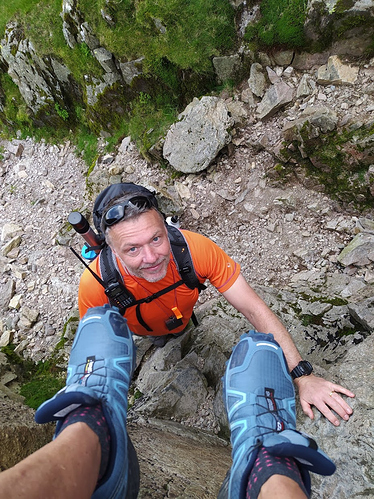 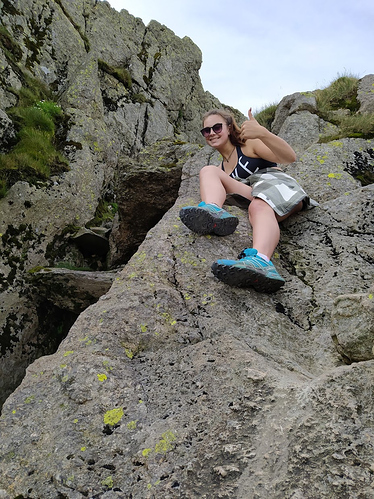 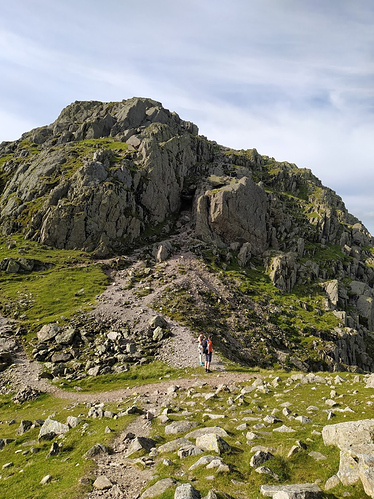 Then quite out of the blue I heard G7KSE/P activating High Crag and we were able to complete our set of three WOTA S2S contacts.

Stunning views (not always remembering to stop before looking!) were then soaked up on the long walk back to the car at Wryonse, with the Langdale valley proving once again a great photo opportunity. 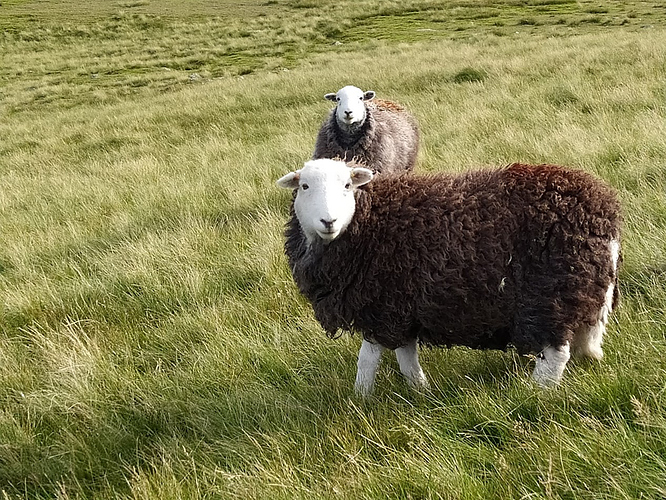 Given the long day we decided that Cold Pike was too much of a stretch. Our tummies were rumbling and a pub was beckoning.

The nearest on our route home was The Three Shires Inn. We received excellent service and their home-made burgers were a real treat, as was the beer courtesy of my near neighbour Richard who started Bowness Bay Brewing.

Great day walking and radio, a good pint and pub food at the end, doesn’t get any better than this!