Last year, I planned two multi-WOTA trips but postponed them both due to covid lockdowns, etc. On Monday 22nd November, I intend to walk the horseshoe of Outlying Fells in Bannisdale (north of Kendal). The parking is only about thirty-minutes’ drive from home but as there are eight of them, that makes for a long day out, so I wanted to do them ASAP before the days get any shorter. 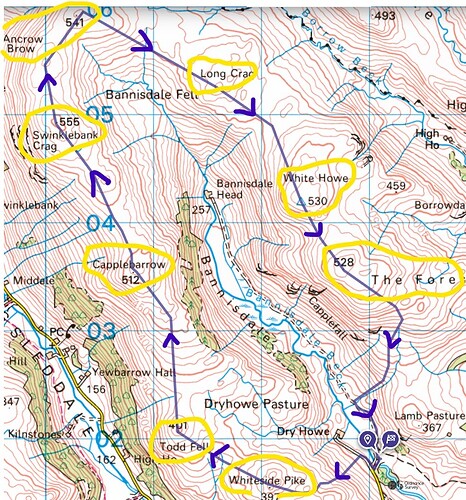 With sunset about 4pm these days, I need to start walking about sunrise (8am) to walk the circuit and have about 20 minutes for each activation. So, that means 2m FM only. From previous WOTA walks (e.g. in the Shap Fells) I’ve found that some 2m chasers have difficulty getting signals from activators especially from the smaller summits, so I’ll be taking a J-pole as well as the usual Diamond RH-770 ½-wave telescopic whip. The rig is my trusty Yaesu FT1D 5W HT.

Weather forecast is cold but dry so it should be a good day out for me and my usual companion, Bella, a 7-year-old female Cocker Spaniel. Hope to work many of you then. I hope someone is awake for my first activation around 8:45am.

The temperature was -2C when I parked the car at 8am but it was light enough to see my way up the western flank of Bannisdale looking for a way up to Whiteside Pike LDO-050. There was no path (that I could find) and my route involved some frustrating crossing and recrossing of a wire fence and a stonewall to get to the summit. To my surprise, a bloke [a local man it turned out] was sitting there with his binoculars admiring the view on this very cold but sunny and dry morning. He was the only person I met or saw for the rest of the walk. Like the Shap Fells to the north, this part of the Lake District is moorland with rolling hills with crags but no really steep walking. 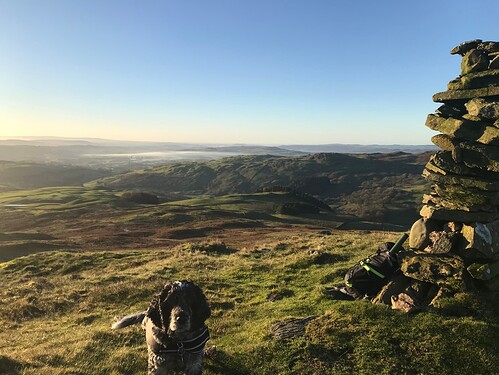 There is a well-defined path leading away from WP towards Todd Fell. Although boggy in places the path is easy walking and continues for the next five summits. Todd Fell LDO-048. like many of the others in the Bannisdale circuit. is unexciting with views only slightly different from its neighbouring Wainwrights. 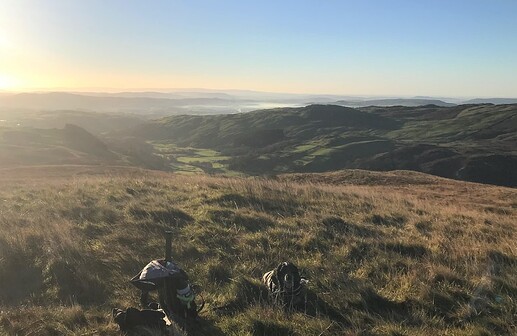 On Capplebarrow LDO-020 I worked Reg 2E0LDF/P who was on Skiddaw LDW-004 (SOTA G/LD-004) and who was having an intermittent cut-out problem with his setup, but otherwise was very readable. 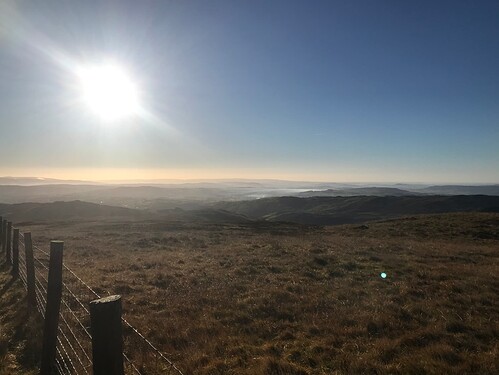 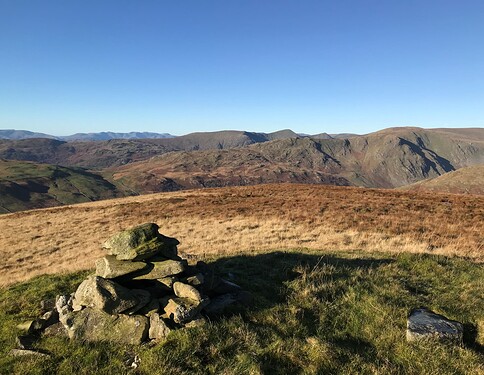 2021-1122-4 Swinklebank1920×1484 380 KB
Also on this summit, another regular chaser G6LKB (the first of 4 contacts today with David) was very strong as usual. Other regulars heard were Steve MW0ISC near Mold and Brian G4ZRP on the Wirral.

At Ancrow Brow North LDO-011 [so indistinct a summit you could walk right pass it] I heard Reg 2E0LDF/P (not on a summit) in a ragchew with Peter GM3VMB near Lockerbie but he couldn’t hear me. So, I switched from the Diamond RH-770 ½-wave telescopic whip [my default antenna] to a J-pole on a 7m pole. Unfortunately, by the time I had done this, Reg had gone. It’s interesting that the J-pole doesn’t seem to affect local or mid distance QSOs [reports both ways with G7CDA, G1OHH and G6LKB were about the same as before] but GM3VMB’s signal went from mute threshold [with RH-770] to 5/4 [with J-pole]. I also worked Dave G0PMJ in Darlington. I got pretty cold with the extra time erecting and dismantling the J-pole/mast so avoided using it thereafter.

I thought Long Crag LDO-028 at 493m ASL and surrounded by higher hills might be a challenge but got and gave decent reports with G7CDA, G1OHH and G6LKB. There was no obvious path from here and a high stonewall blocking my way runs up and down the hillside. I opted to go down hugging the wall looking for a way over. I lost a lot of height before I decided enough was enough and scrabbled over the wall. It was a long unpleasant and tiring slog across rough moorland with bogs having to regain that height (and much more) to get to White Howe LDO-014. At the summit there was a well-defined path heading back in the Long Crag direction, so with hindsight, I should have gone up the hill from Long Crag to find that path. Readers might benefit from that advice but I doubt I’ve be back again. 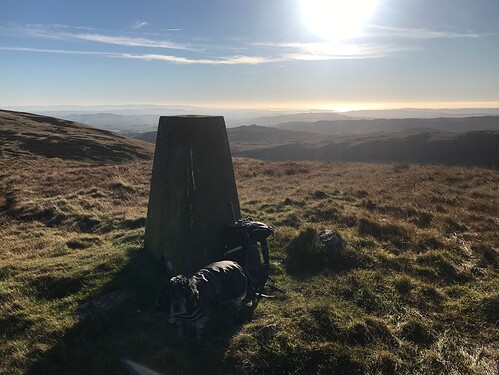 2021-1122-5 White Howe1920×1440 317 KB
Nice to have a trig point at the summit to use as an operating table. I think White Howe has the best views of any of the summits [or maybe I was just glad to have made it]. Lots of good contacts including with Chris M0KPW on Lambrigg (SOTA G/LD-046) who said he has been waiting for my arrival before leaving.

I was glad finally to get to the eighth and last of the alerted WOTA summits, The Forest (Borrowdale Head) LDO-016. As well as the regular chasers I got David G7WAW for the third time and Mark M0NOM from home in Windermere. 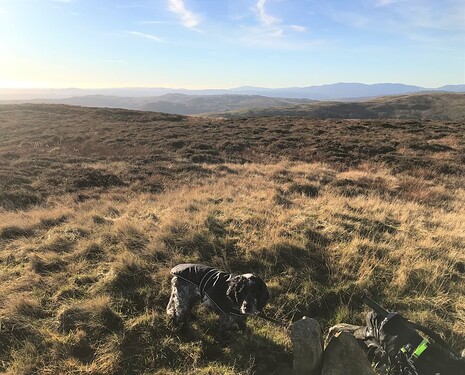 2021-1122-6 The Forest1920×1547 483 KB
After my bruising experience of bush-whacking [or should that be tussock-whacking] I decided to stick with the descending path rather than follow the original somewhat arbitrary line of my planned route. I realised that it was taking me via Lamb Pasture LDO-057, which I had activated two years ago. It wasn’t much of a diversion so decided to make it nine Bannisdale WOTAs today.

I was going to alert for Lamb Pasture but my phone had gone to Low Power mode so thought better of it. Didn’t get any of the usual chasers [no doubt earning a well-deserved rest from chasing me] but got M7JHB/M driving en route near Kirby Lonsdale and Mick M7MCG. A steep and tricky descent to my car parked at the same spot from two years ago.

As I started to drive up the single-track road a herd of sheep were trotting down to meet me followed by the farmer in his covered ATV. I reversed up into the original side lane to let them all pass but the farmer drove over to talk to me. I thought, oh dear, he’s going to tell me off about my parking there or something, but we had a friendly chat about my walk. He said I must have started early – he was right about that.

Nice activations Andy and great photos…did have a listen out for you but was never going to happen from my home qth in Cockermouth.

Thanks for the write up. Enjoyed reading it. I managed to work Reg on Skiddaw, from work (car in carpark), but no one else unfortunately. I’m rather fed up with not having the time so may look to move desks in the office a sneak a full 2m setup.