With The Lakes now full again we decided on a lesser trodden fell. Andy @G8CPZ had recently combined Beacon Fell with a couple of others, so we picked this one based on his recommendation and that it seemed an easier proposition than many others with Alex suffering a little with her feet.

Parking was at a premium and we managed to get the car fully off the road in a pull in. 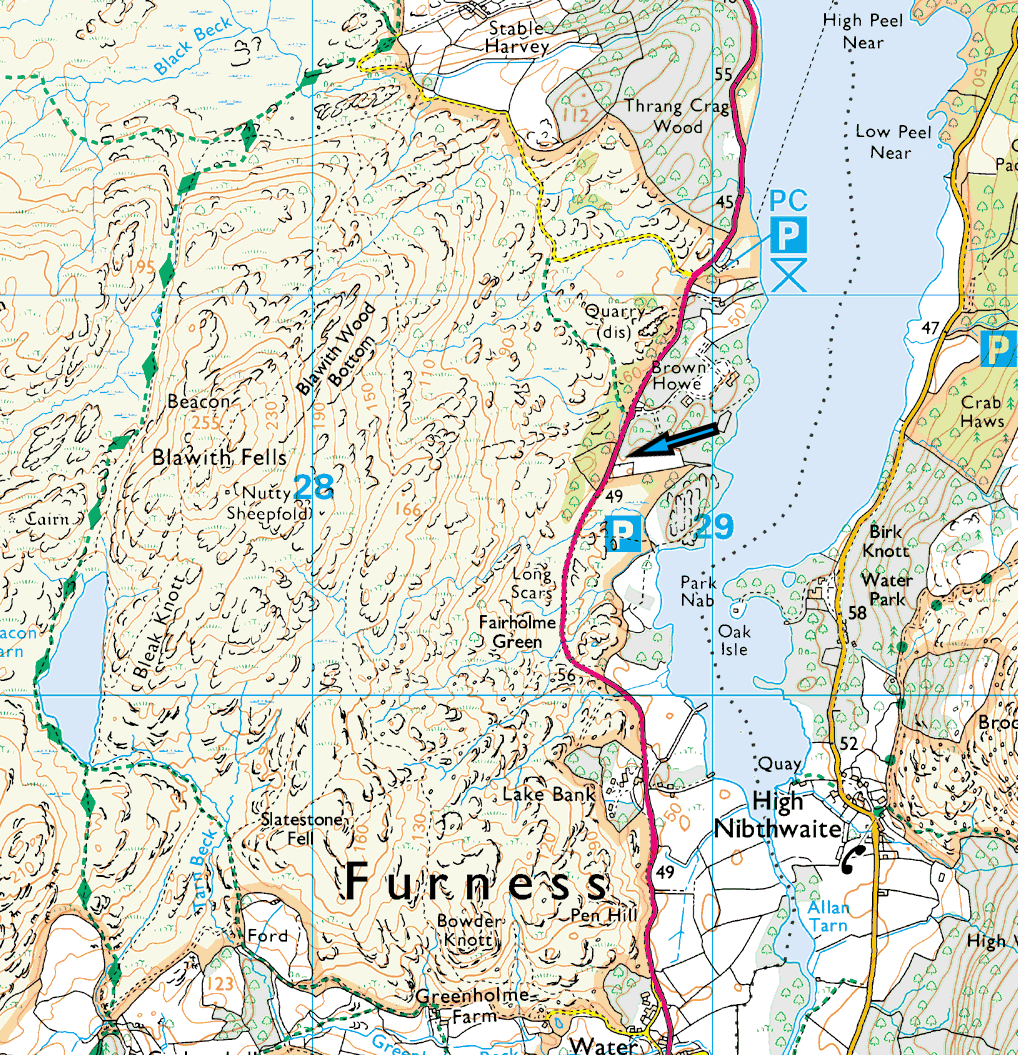 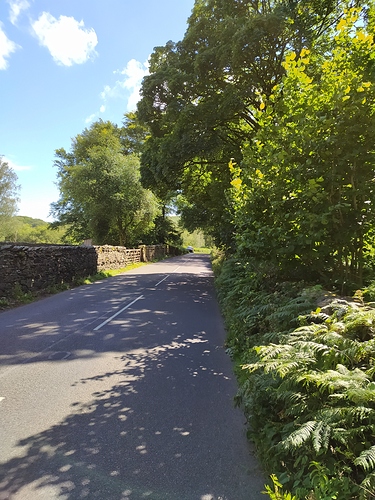 What we should have done now is taking a really hard, long look at the map and we might have spotted the obvious path going North West just 200 metres up the road. Instead, we turned South and not wanting to stay on the road any longer than we had to took the first trail off to the right. This trail didn’t last too long and then we were into the bracken, moving from one craggy rock outcrop to another. Not a recommended way to get up here when the bracken is in full bloom!

Eventually after hill 166 we did pick up a more obvious path to the top. The wind was quite strong but it wasn’t too cold and I spent the entire time on the summit in a shirt. The views were glorious - air clarity was amazing ensuring the 360 degree views could all be fully appreciated! 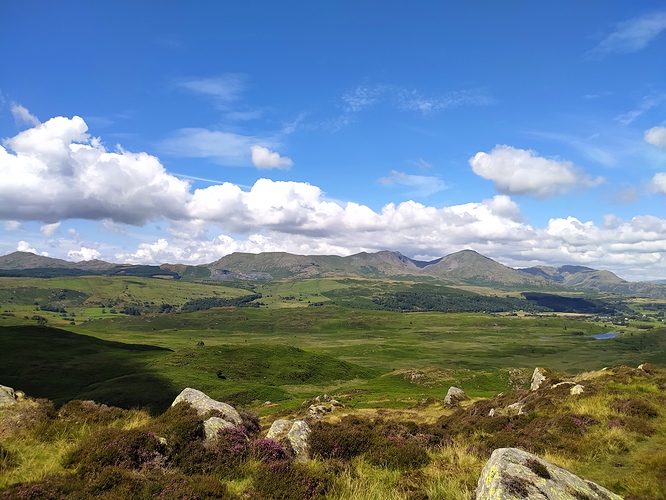 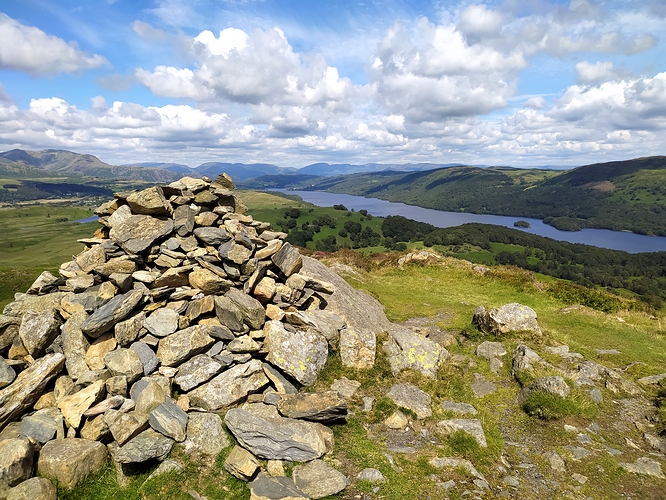 I struggled with my optimal setup of HF SOTABeam Quad Band Dipole, Spectrum Communications Slim-J and SOTABeams Compact 10m pole because the wind was too strong. For VHF I started with the FT-817 built in whip, then resorted to the Slim-J later about 4m with a hand-held pole. It takes some doing!

First in the log was G4ZOI/P on G/LD-049 SOTA Summit Kirkby Moor - very obvious to the South. Chris 2E0XLG - who was operating from “The Shack on’t Hill in Gods Own Country” - pointed out that the North Welsh coast line was clearly visible from his location today, as indeed it was for me!

I notified the HEMA Facebook Group that I was on 2m but alas no-one was close enough to hear me. I did manage to get the HF antenna up long enough to get a contact on 80m with chaser G4IAR and also Mike 2E0YYY who manged a 33 both ways using a 20m dipole! Very quiet but I do a lot of joint outings with Mike (another write up to follow) so can pull his voice out of the noise very easily.

The walk back, following the path to the North, was much less of an adventure and completed our trip to this very wonderful summit.

All photos were taken with my new phone, a Xiaomi Redmi Note 8T. This was an upgrade from my previous Cubot £99 phone - spending a little more at £148 has bought me a cracking phone - as can clearly be seen from the photos which are completely unedited.

Thank you to all the chasers, as always. Apologies for the late spots, I am very conscious that our planning leaves a lot to be desired! 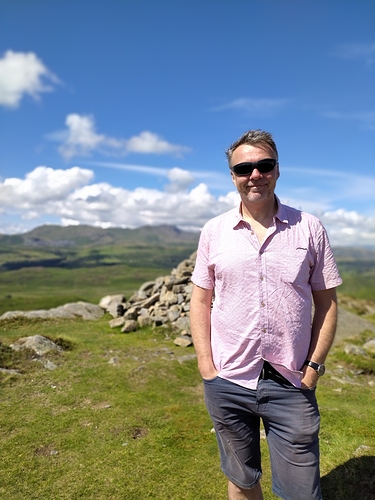 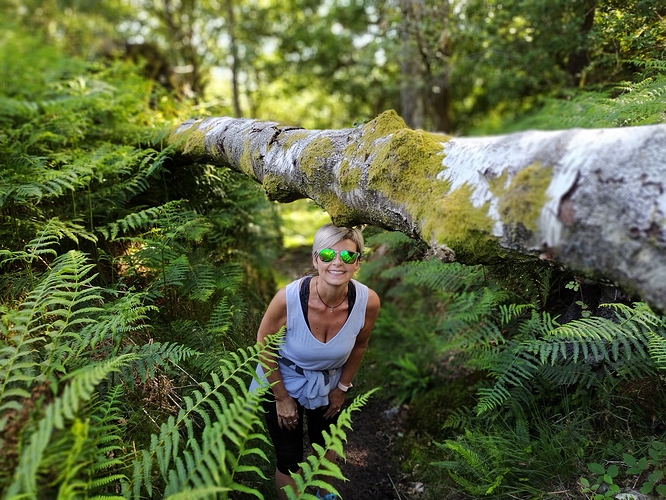 Good report Mark. Rotten luck on following a path that ended in dense bracken. I recommend the parking and route to Beacon Fell given on the Wainwright Routes website.
http://www.wainwrightroutes.co.uk/beaconfell_r1.htm

There was room for many cars at this parking place located on the A5084 about 150m south of a footpath going west up onto Blawith Common and then north up the east side of Beacon Tarn to Beacon Fell.

After activation don’t take a ‘shortcut’ - as I did - down the steep western slope of Beacon Fell to join the Cumbria Way public footpath - you will spent 20 minutes wading through dense bracken. Wool Knott (LDO-107) is a short diversion from the path at the south end of Beacon Tarn. Tootlebank Height (LDO-099) and Blawith Knott (LDO-092) to the south and south-west are worth a visit if you have the time and energy.