Hockey commitments today took care of any grand plans for a Wainwright bagging walk and actually given the weather conditions we experienced on the modest summit of Little Mell Fell I’m glad we stuck to this one. On offer was a few potential WOTA S2S with Geoff who was also making a rare appearance on the fells these days!

Reading up the night before Wainwright didn’t have much to say about Little Mell Fell. I’m surprised it made it into one of his books! It is a pretty featureless mound with very little shelter. The SOTA crowd love it however as it is close to the motorway and a useful 2 points. In winter with a height of 505m (which is just over the 500m winter bonus category) it gives a healthy 5 point return for a 20 minute ascent!

We dropped Raine off at County Hockey practice in Penrith and took the 20 minute journey to the standard starting point of The Hause. The initial path before the ascent was a very boggy and muddy affair which required careful negotiation between tufts and stones to avoid wet and muddy shoes! Alex my wife came with me and had forgotten her walking shoes so we had to tread very carefully. 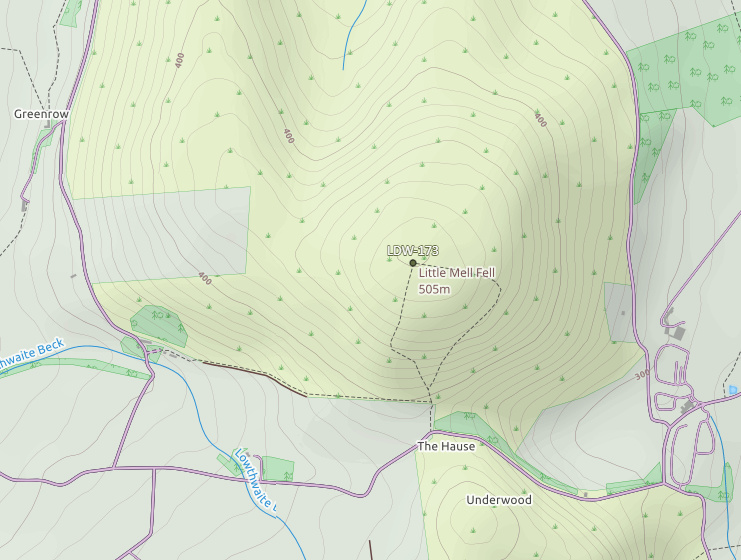 There are two main routes marked on the map but in reality there are quite a few that zig-zag in-between these two more direct routes. We took the steep but quick Westerly route which affords better views of the magnificent snow-topped Blencathra on the ascent and descent. 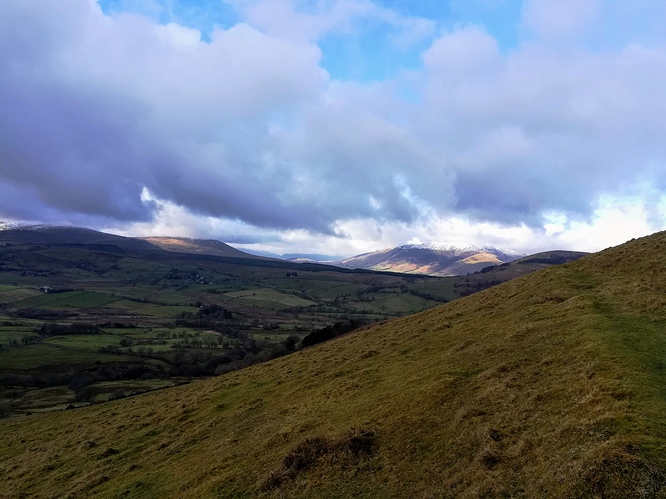 The bitter wind made selfies and a panorama check a quick affair before we set off for a leeward side activation point. I managed to leave my delta-quad antenna support leaning against the benchmark which I had to run up and retrieve after the HF activation. It was probably a good way of staving off hypothemia. My mind probably went blank after hearing Geoff G4WHA/P working Sue G1OHH from Branstree LDW-081. Although Geoff was a scratchy 51 with the radio on my shoulder he did improve to a 55 once held aloft and a WOTA S2S QSO was achieved in this manner before departing the benchmark. 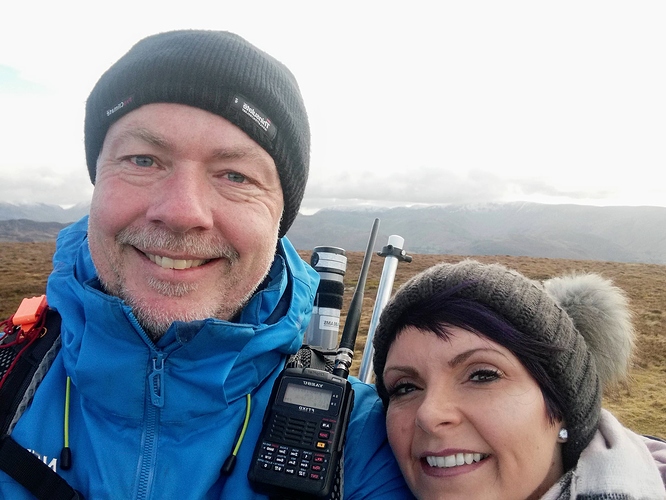 And so to the business in hand. HF setup, with Alex’s help, was straightforward with plenty of space amongst the spongy vegetation to erect the SOTABeams 80/40/30/20m QuadBander which went up nicely first time - a godsend when the wind is biting. This was connected to the FT-857 and set to work on 80m initially running 100w. A distinctly lacklustre start saw me calling CQ for a good 5 minutes before the first response from the omnipresent G0FEX Ken in Leicester. Great to get Phil G4OBK in the log next followed by a run of chasers from the UK, Belgium and Germany. 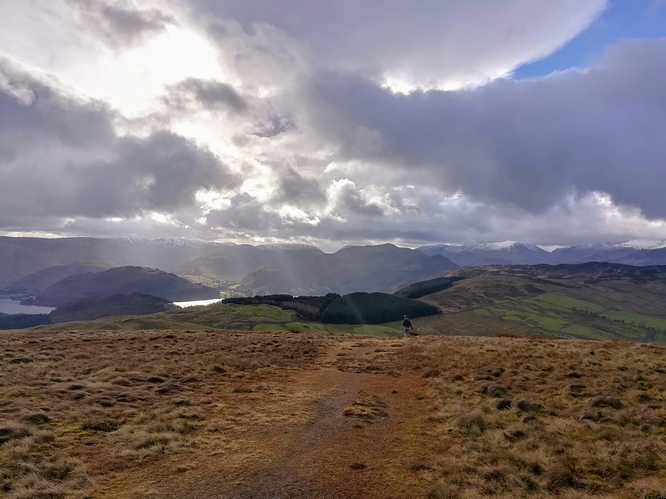 Switching to 40m the band initially sounded promising and then the realisation struck that there was a competition on. Having spent around 5 minutes attempting to find a free frequency I made the executive decision to cut my losses and give 20m a go. Sunspot conditions and the K-index at the moment meant I wasn’t hopeful of much activity and after a similarly slow start to 80m I did get some stations in the log including a ground-wave contact with 2E0WDX/M in the North East who has worked me on summits before - he is always weak but a contact is made!

Once the run had dried up I moved quickly to 14.285 Mhz and was able to get a SOTA S2S with Leszek SQ9MDF/P and his wife SQ9NOT/P Wiolleta on the 1,323m Polish SOTA summit of Lipowska.

Alex was starting to get really cold now so I encouraged her to get moving and help out setting up the Delta Quad for the remaining 2m activation. I strapped the FT-857 to my chest and operated with the antenna support in the crook of my arm - this works really well and I’ve noticed how easy it is to move up and down the bands. I heard Geoff on his second WOTA of the day Selside Pike LDW-110. He reiterated how cold it was and as it happens this would be the last summit he managed to work given the conditions under foot. It was also great to get Rob G7LAS in the log - he is the instigator of the HEMA programme and he was on a similar height North Pennine HEMA Summit of Blea Moor G/HNP-004. I look forward to working some of the Wainwrights that are also HEMAs to support both programmes.

Final log entries of John G0TDM and Chris mobile in Poulton 2E0MOW/M and we were done. I heard Sue working Geoff but I think she was waiting for C4FM with him and Alex was now showing real signs of onset hypothermia so it was definitely time to pack up. Temperature was probably around freezing with the wind dropping that by a good few degrees. 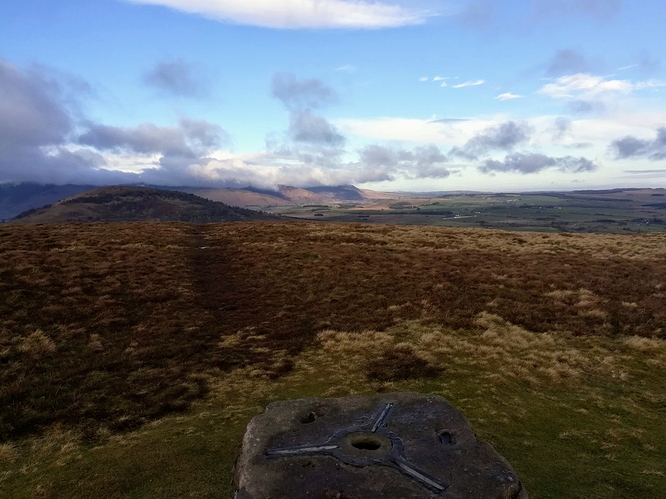 We headed back the same way we came up but chose some of the zig-zag paths instead to ease the descent, although in the end Alex in non-ideal footwear chose the direct approach with my assistance. Except where I slipped and nearly took her with me! Only about 15 minutes to get down and the car heater was a welcome treat from this very wintery activation! 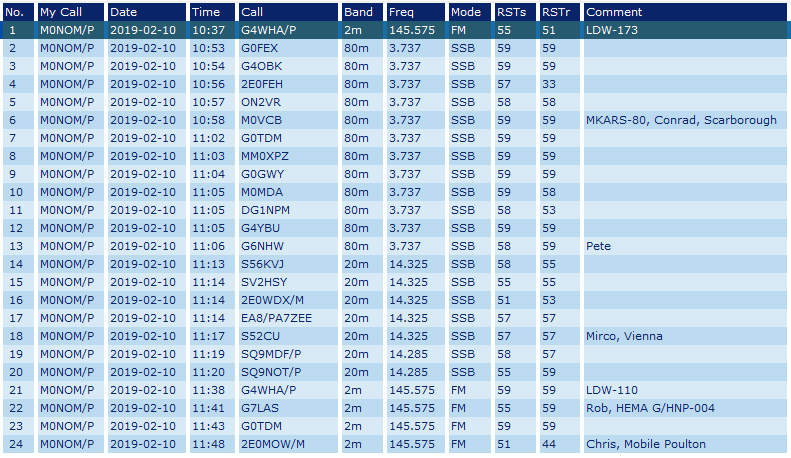 Finally if you listen to this audio recording you will get to hear Geoff activating Selside Pike, being picked up (closest to the phone doing the recording) on the FT1XD on the ground with standard whip (left ear), whilst I am using the FT-857 in harness with the Sandpiper Delta Quad in the background (right ear) completing my 2m activation.

We came back to Windermere via St. John in the Vale and I have to say Blencathra up-close from the A66 was a stunning sight to behold!

Thanks for the great report Mark.

Good to see WOTA getting back its ‘oomph’… clearly it’s in safe hands which can only be good for our hobby!

I like Little Mell Fell but there is hardly any shelter up there. I have activated it a few times in all sorts of weather including mist!

Great to get S2S with you. The wind was absolutely bitter that day but at least it stayed fine.