Tuesday 1st June @ 08h00 RT was the designated Reg (@2e0ldf) collection time for the third guided walk by my very own personal tour guide… I was late… not very late, but I just can’t seem to get anywhere on time.

We were one down too, so that should have made it easier. M7KOM was nursing a swolen knee, the result of an altercation with a scooter guided, or should I say fired, towards him by his little brother the day before - happy to report no lasting damage. So off we headed for Mungrisdale with the little terror in tow.

This was a very similar walk to that done by @M0NOM a month earlier. Spoiler alert - Blencathra was off the menu very early on.

Reg will likely post some photos, and Marks report is better than I could muster, so I’ll keep this one short. We had a great time on the Fells. I went armed with x2 5Ah Makita Lipo drill batteries and my mobile radio - FTM-7250D. We got some great long distance contacts.

First in the log was Mark @M0NOM on Loughrigg Fell. Amongst the 12 contacts made on 2m FM, Rob in Southport was probably the furthest away. It was also great to get Richard on Blencathra - but that summit will have to wait for another day.

Again, some great far away contacts, Dave in Darlington, Paul in Motherwell and Sue (@g1ohh) in Lancaster.

Having failed to find the lake as promised by Derek @2e0mix we set about setting new expectations regards to contacts you could make from this fell. I’m told that it’s not unusual to get only 3 or 4. This was the prize of the day for David @g6lkb who had travelled with his son Clifford @m6lkb specifically for this chase. Unfortunately we could not get Sue @g1ohh. Reg has more 17 in the log, I’ve only 16, so not sure who I’ve left out… We got our only NI contact, Norman, from here. 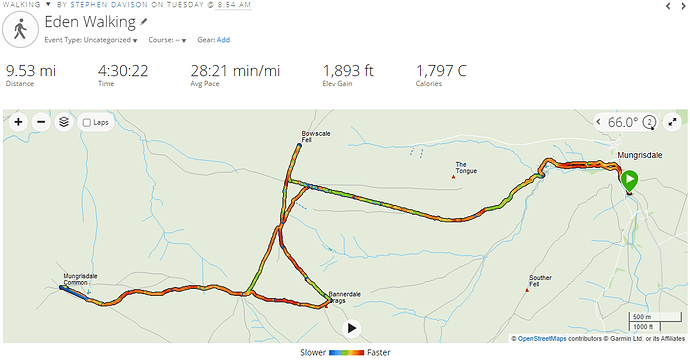