I asked Reg 2E0LDF if he would like to do this round of fells on Sat 11th September 2021 as it was the first day of the SOTA LD weekend and there would be a lot of activators out. He very kindly agreed and we met up in Mungrisedale at about 0830hrs local time.

After getting kitted up we set off at 0845hrs. The weather was fine when we started and we had views but as we got towards the ridge taking us into Bowscale Fell LDW-087 the cloud was down, the wind had got up and it was mizzling. We arrived at the summit at 1010hrs, a distance of 2.6 miles from the start. 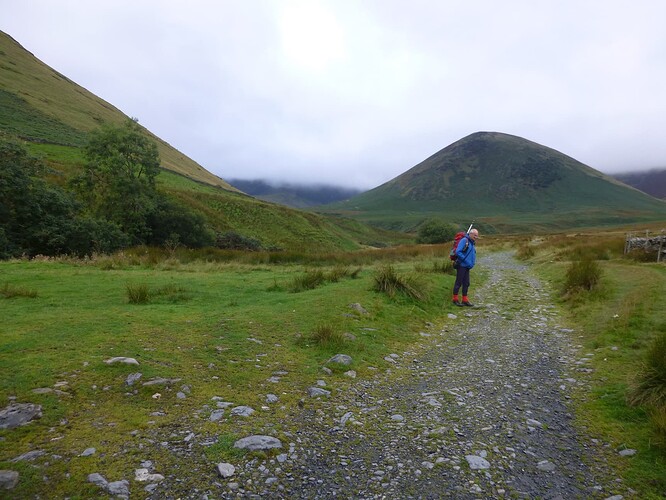 Start of the walk. Bowscale in cloud. 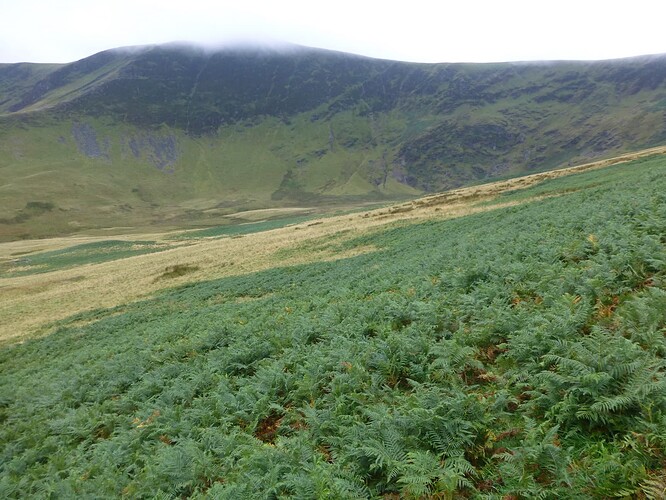 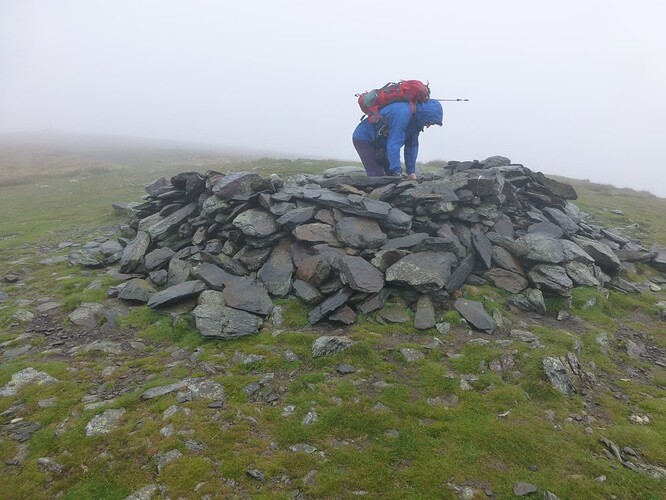 Because the weather was awful we just sat down in the summit shelter. 8 contacts were made including Phil G4OBK/P who was using a 5 ele beam from the Cleveland Way. He was a great signal.

We left at 1026hrs and in very poor weather we headed to Bannerdale Crags LDW-096. We arrived at the summit where there is no shelter at 1055hrs. According to my GPS the distance was about 1.1 miles. From here 6 contacts were made and these were as follows:-

Again the weather was very poor. Visibility poor and it was light rain. 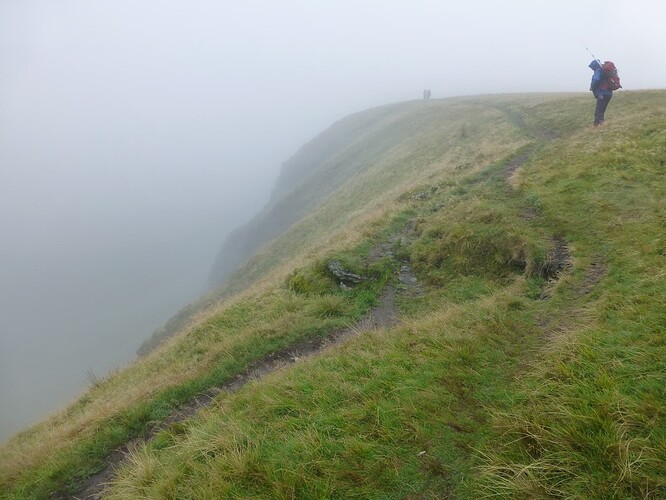 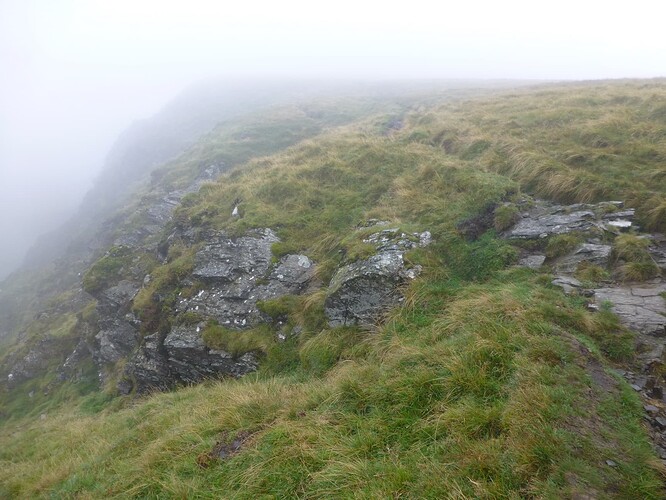 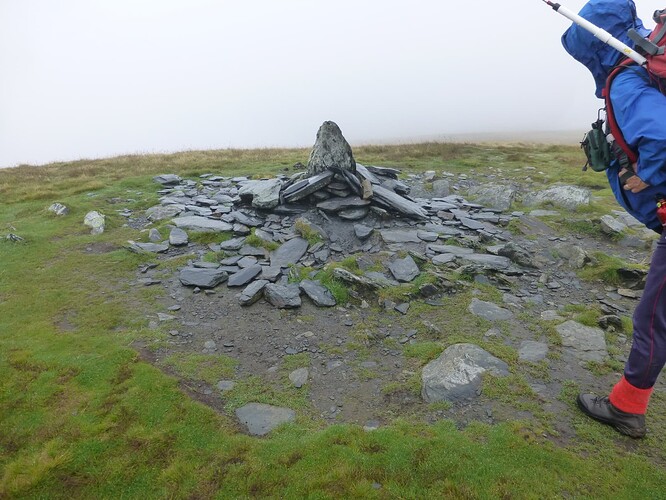 We left the summit at 1117hrs and as we started descending we started to get some views. We drop down quite a lot and then it is a climb the last bit which was quite steep. At that stage we had no views and it was like that as we approached the summit of Blencathra LD-008/LDW-014. The distance from Bannerdale Crags to Blencathra according to my GPS was 1.6 miles. We arrived on the summit at 1219hrs. 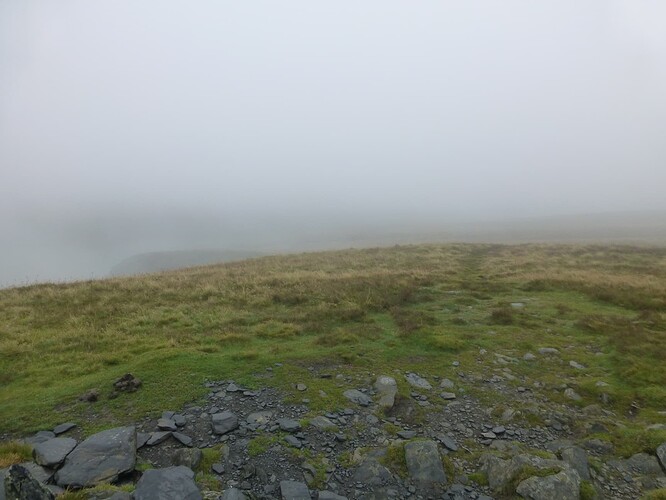 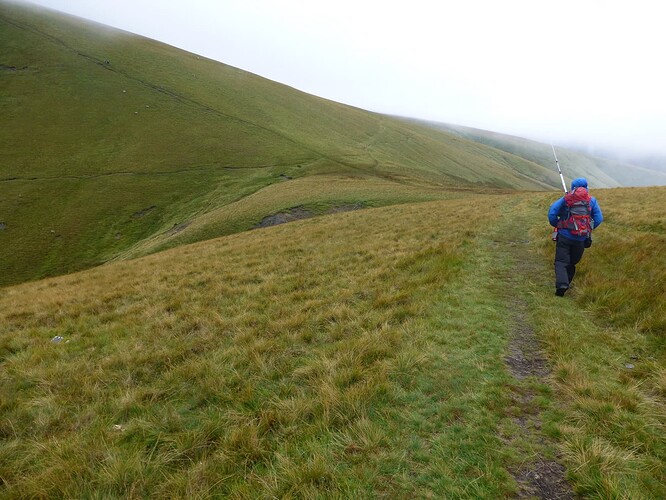 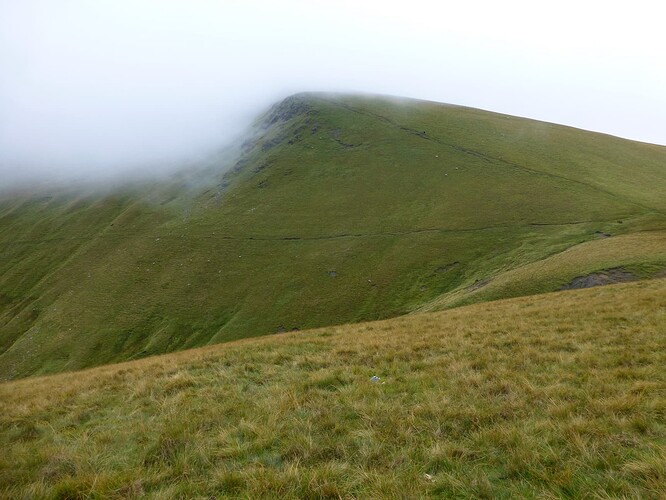 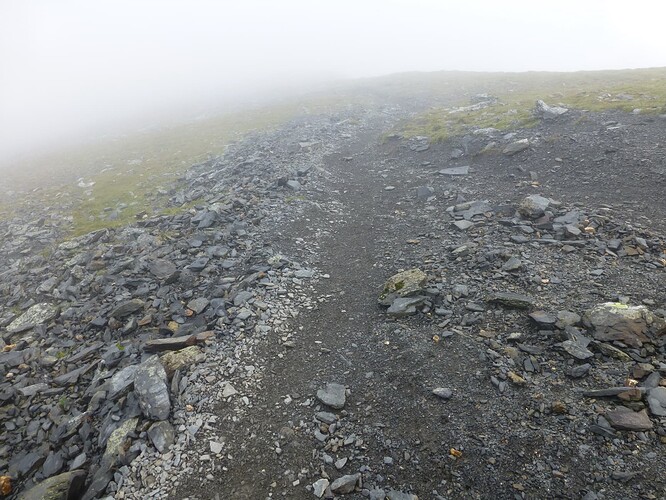 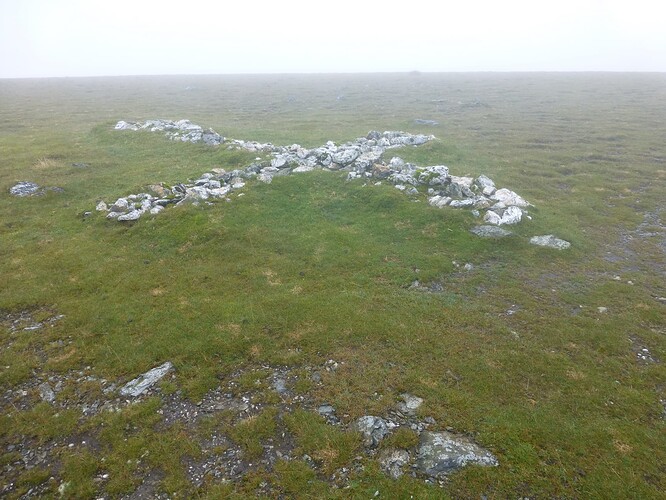 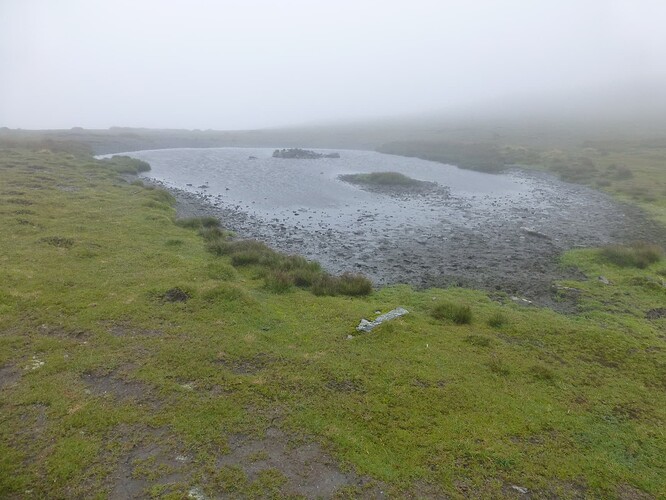 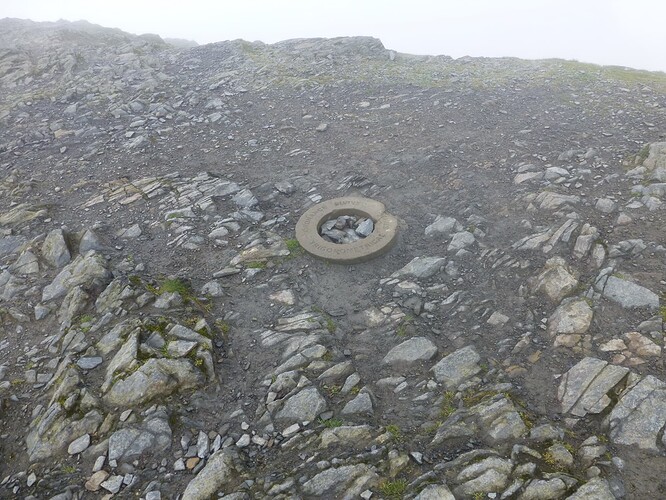 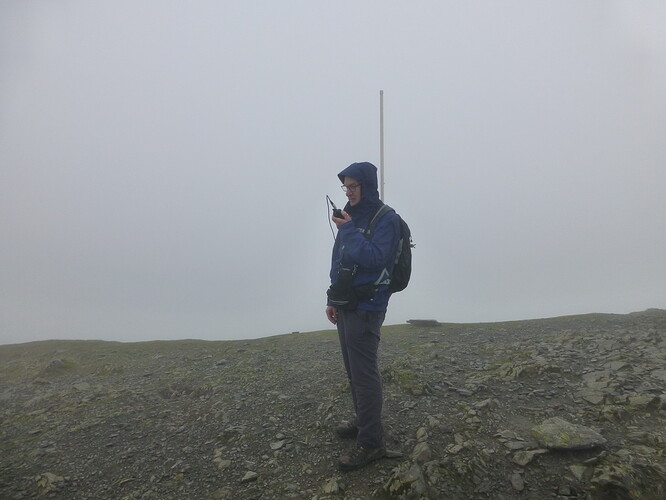 Conditions again were poor with very poor visibility, windy and rainy at times. We ended up with a big pileup at one stage and 26 contacts were made by us. By the time we had worked the last station both Reg and myself were very cold. We were both extremely well kitted out but when you are stood for about an hour as we were you soon cool down. However, we left at 1317hrs and made our down towards Scales Fell and thence up to Souther fell. It is quite a steep descent but as we descended quite a bit it cleared out and we had great views for the rest of the walk, although Blencathra was still in cloud. 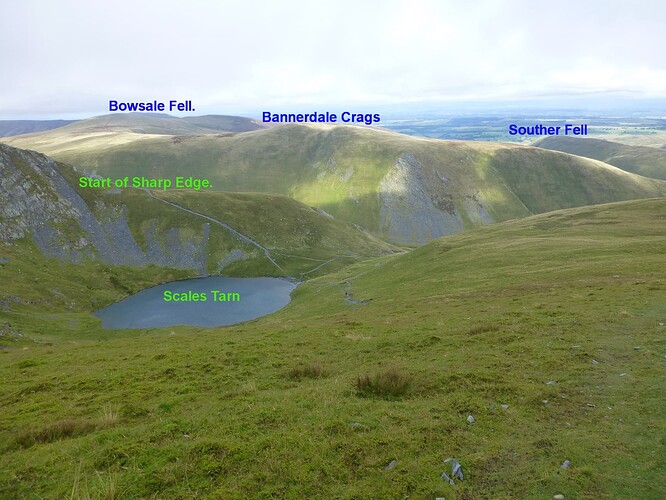 Fells we climbed. I hope i have them right! 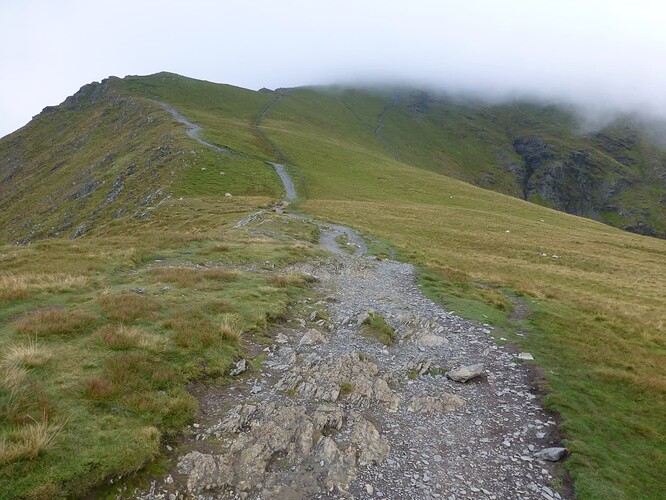 Looking back to Blencathra. 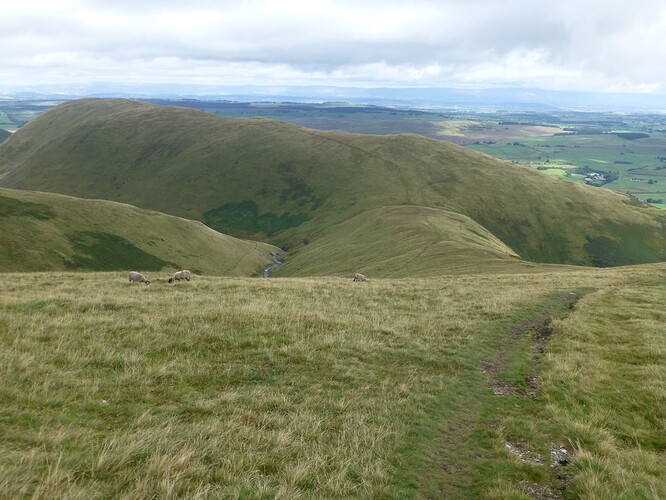 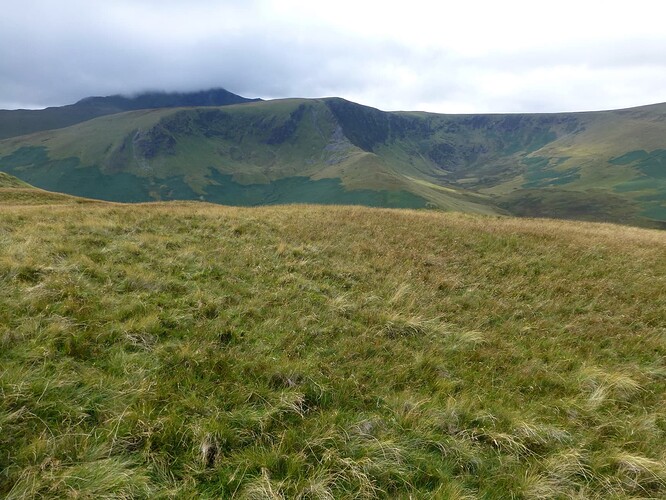 The climb up to the long plateau of Souther Fell LDW-163 is quite easy and we arrived at its summit at 1451hrs. The distance from Blencathra to Souther Fell was 2.85 miles. Only 2 contacts were made, the first with Andy M0FMF/P on Stoney Cove Pike LD-018 and Tim G4YTD. We left at 1504hrs and arrived back at the car at 1550hrs. 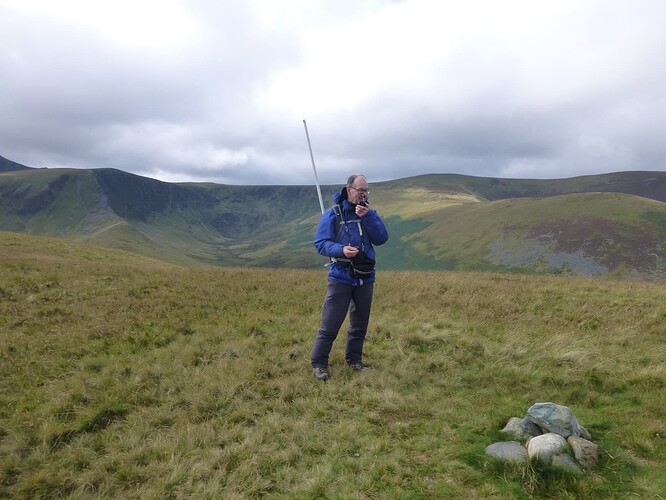 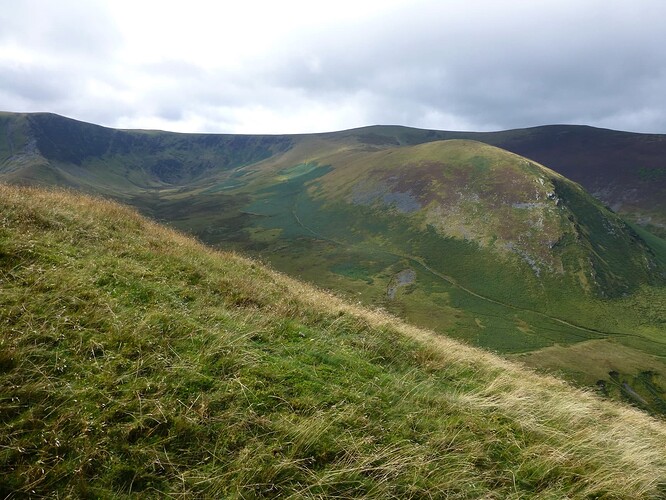 Looking at the route first thing in the morning.

It was a fantastic walk even though the weather was lousy for a lot of the walk. However these things happen and you just get on with it. I have walked in worse conditions. Reg is an excellent walking partner and I personally just need 2 more summits to complete the Nothern Fells as an activator. The last 2 are Bakestall and Great Calva which I hope to do in October.

I would like to thank Reg for the great company and crack and also all the chasers who worked us both. 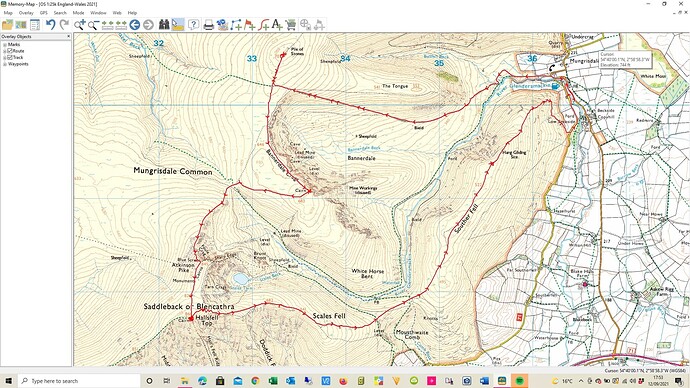 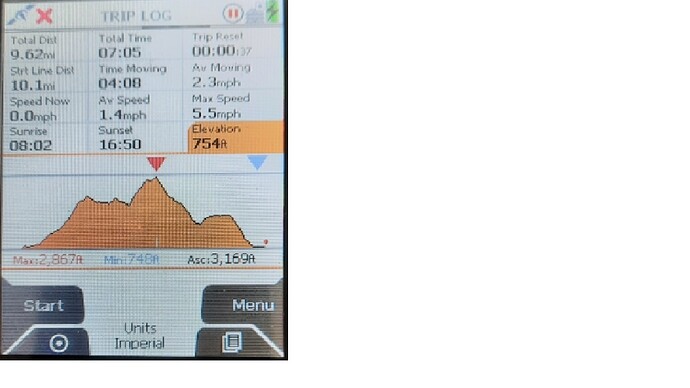 Great report. Was pleased to work you both on three of the four from a very warm and sunny Silloth! On the way home, about 5pm, the Western Fells were still topped with cloud and it looked very moody.

It’s a similar walk that Reg took me and Luke on earlier in the year. We did Mungrisdale but did not have the legs to go up Blencathra, and hence also did not do Souther Fell.

Reg said the photos did not work for him as they were on FB, so here is one of Luke getting ready for his 300m time trail. He does really well as I find it a little terrifying, what with not stoppers, gears or freewheel! 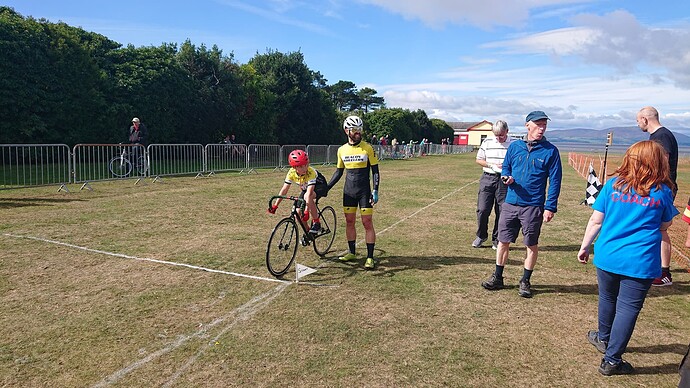 Thanks for the contacts.

Shame about the weather but you both still got the job done and well done, nice report great to see the lay of the land from the photos

I am so envious of the weather you had!!! Looks like you all had a great time with the cycling. Very pleased to get you on 3 summits. Souther fell is quite low and shielde so not great to get out from.

You are right about the weather but it it what it is. I have to plan a walk in advance so have to take the chance on the wx. It was a great walk which always helps when you have great company like Reg. I really enjoyed it apart from getting to cold on Blencathra!!!

Hey, get me in the log, guys! I worked you both on Bowscale. And that was the fell where I once got far too cold due to wind chill in a winter activation and was extremely glad to get down and away. 73, Phil

Sorry about missing you out but rectified now including my activation report. My only excuse is that wx conditions were awful and it mad writing difficult!!

Not sure how I missed this report first time round, congratulations on the walk and contacts, it was a fun weekend made that way by all the contributors. M.