Reg 2E0LDF and myself planned to activate Bakestall LDW-100 AND Great Calva LDW-095 on Sat 2nd Oct 2021. As the weather forecast was not great we still planned to meet up at Peter House Farm. I arrived at 0830 hrs local to find Reg already waiting and we decided to go for it.
The path leading to the start of the ascent follows the Cumbrian way. The path itself made for good walking although further on there was big puddles of water. As we got further along Dash falls came into view and there was a lot of water coming down. It was quite spectacular.
After setting off at 0837hrs we arrived at the start of the steepish ascent of Bakestall at 0918hrs at a distance of 1.8 miles. It was quite boggy on the way up but it was not to bad going. The worst was yet to come. 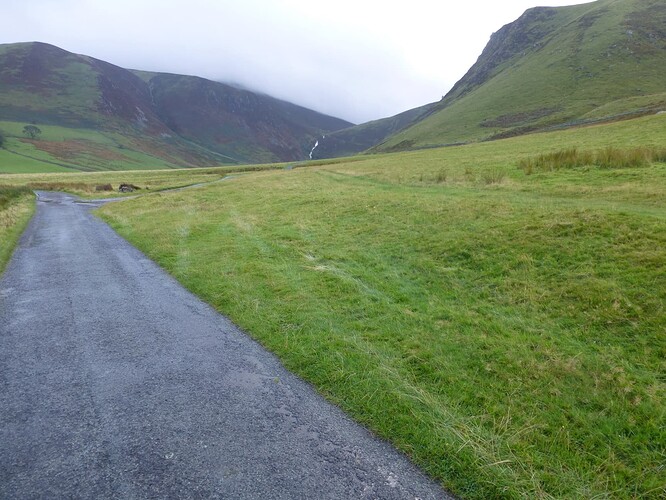 Turn right ahead for Bakestall and Great Calva. 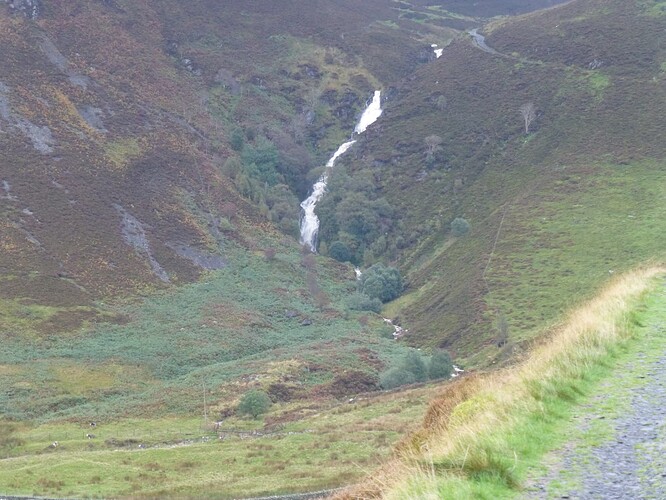 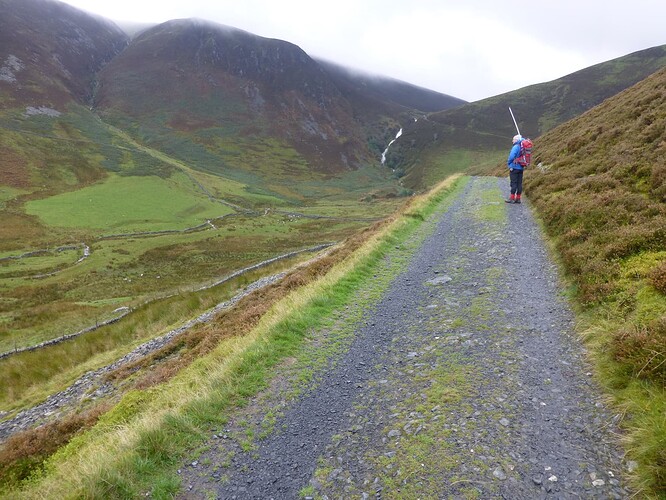 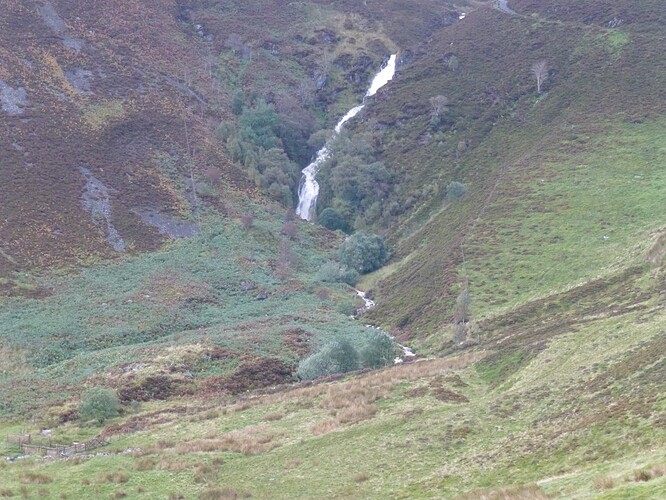 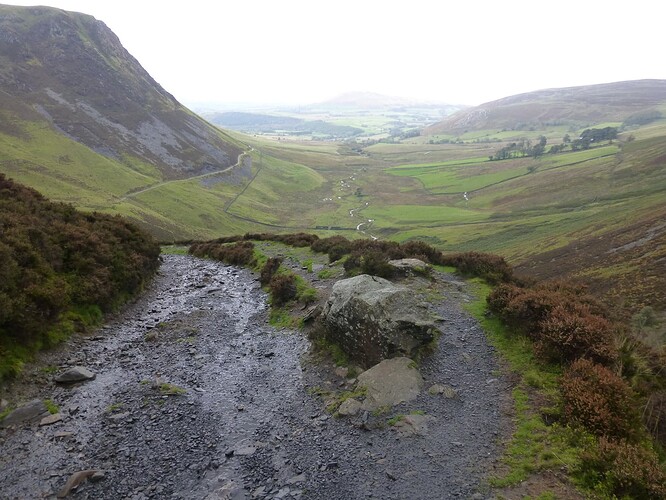 Looking back towards Binsey. 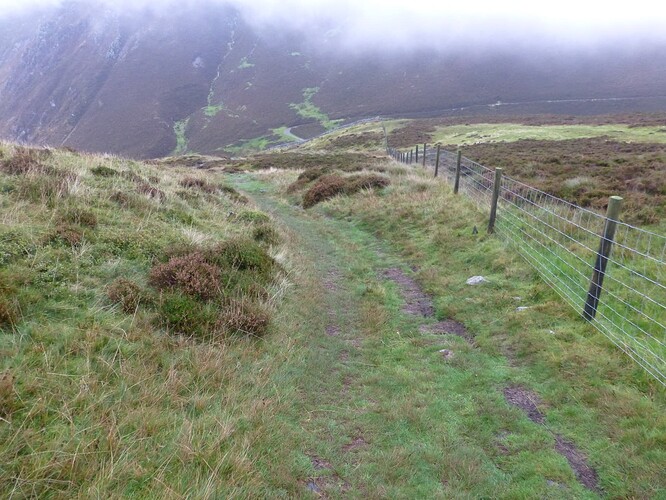 Looking back to the Cumbria way on the ascent up Balestall LDW-100. 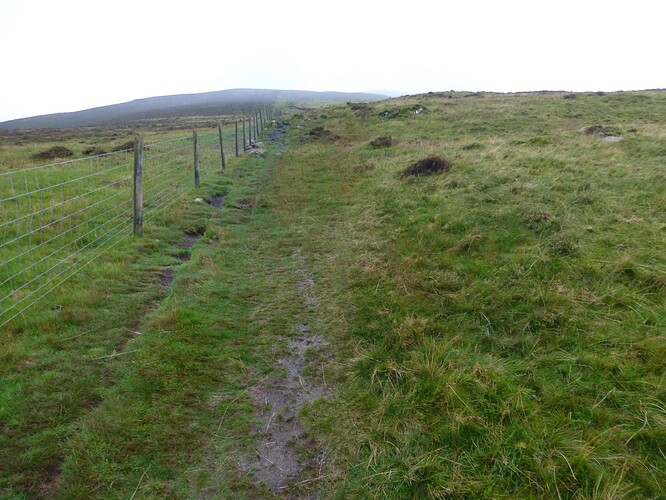 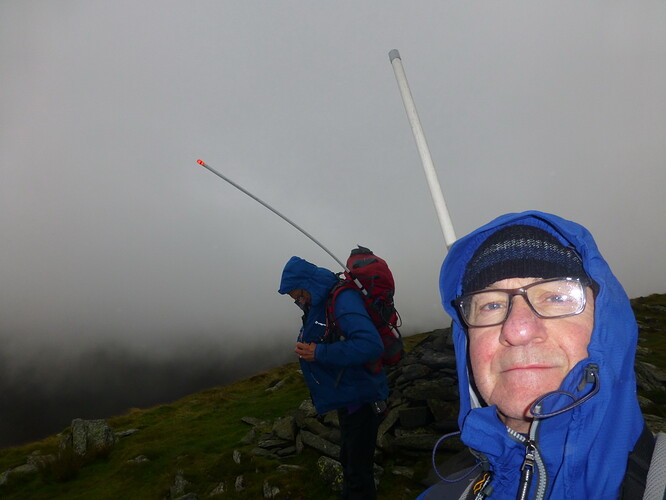 We arrived at the summit at 1000hrs. The wind was fierce and Reg had a wind speed gauge with him and the wind was gusting at up to 47 mph. 5 contacts were made and these were as follows:-

Because of the weather conditions we only stayed 10mins. We would have liked to stay longer and would have done if the weather was good but it was not. The descent took 20 mins and we continued along the Cumbrian way for about 1 mile before turning off the left for Great Calva.
Me and Reg on Bakestall summit. 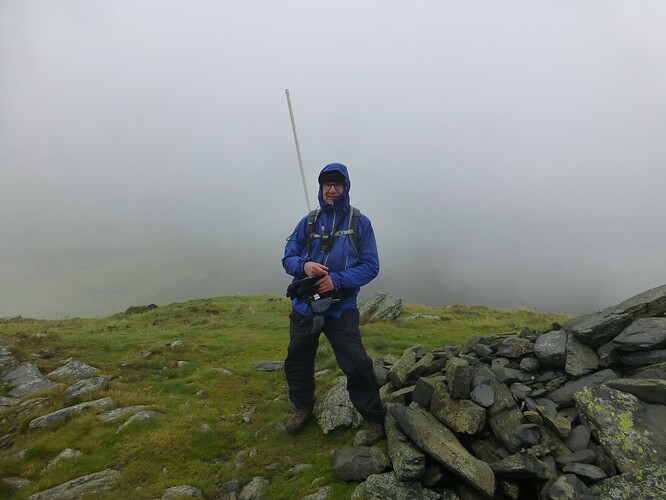 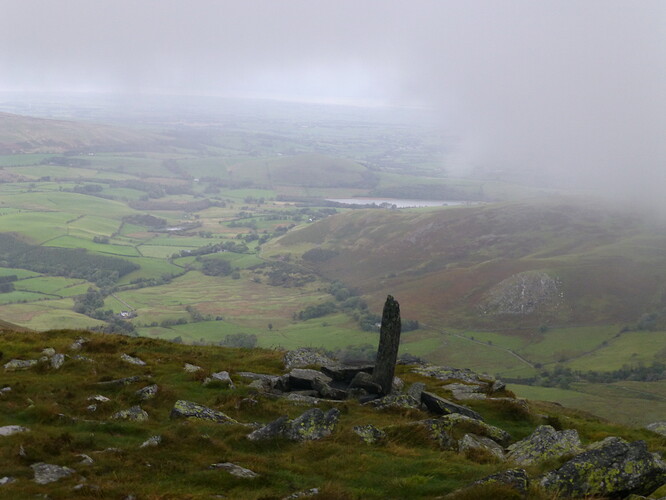 The ascent to Great Calva LDW-095 took 55 minutes in horrendous conditions both weather wise and underfoot. The wind was vicious and the ground was so wet and boggy that it was very hard going. The path was more like a beck in places and it was so boggy for quite a distance! In fact we stopped a few times on the ascent to rest!!! 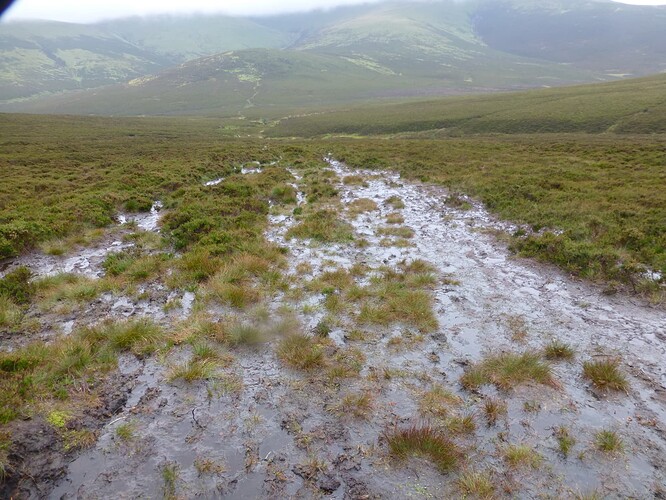 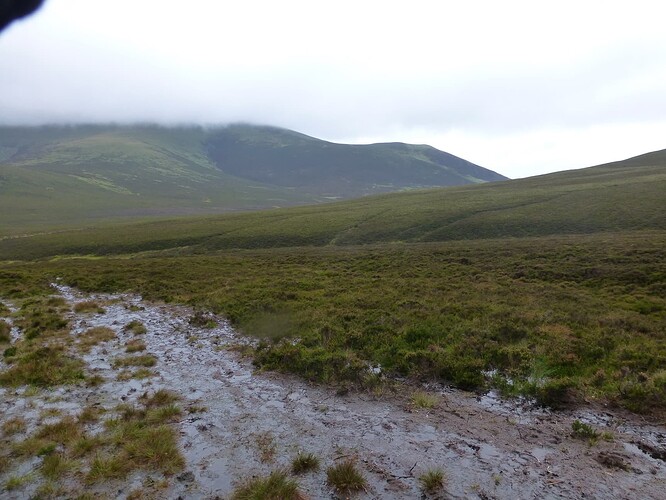 Looking towards Skiddaw and Bakestall. 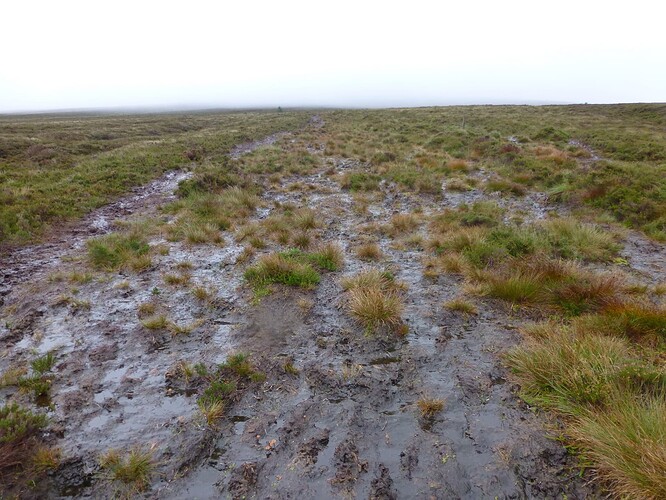 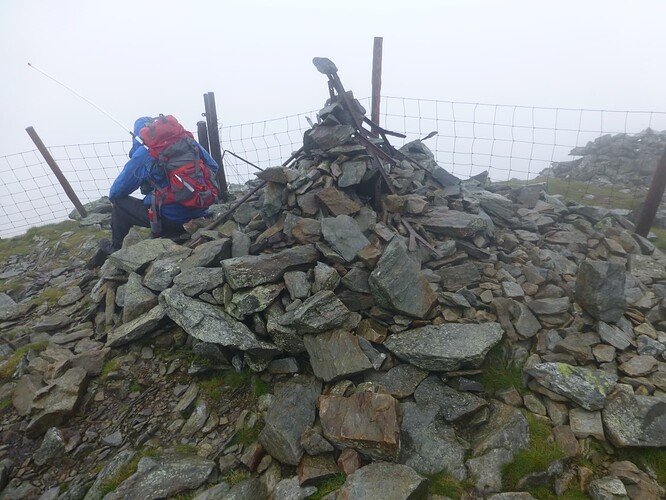 When we arrived at the top by the fence we decided to have something to eat before moving to the true summit. The wind was a steady 40mph with gusts of 50 mph with a high wind chill factor. We were both dressed up for full winter walking but when you stop for a while you soon cool down. I had taken 2 chocolate bars and they were as hard as rock!

We quickly moved to the true summit and operated slightly below it just to get out of the wind. Unfortunately, only 4 contacts were made as we wanted to move off as quickly as possible. The contacts were:-

It is a pity the weather was bad as the views were great when the cloud cleared. As we were leaving the summit we met another walker heading for the summit. It took us 23 mins to get back to the Cumbria way and there followed a 2.8 mile walk back to the car. In all we did about 8.5 miles. 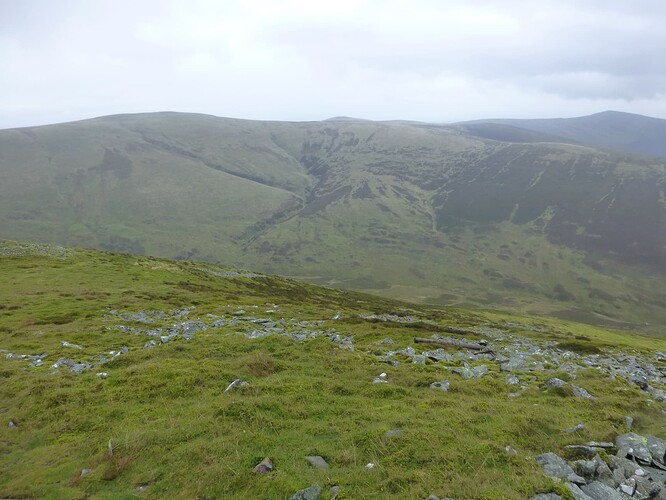 Although the wind was bad it was ok on the Cumbrian way and the rain was just steady away not coming down like stair rods. Although the weather was poor it did not spoil the day as when you are walking with great company it does not matter. Reg is fantastic company and I would like to thank him again for doing the walk with me.

I activated my first Northern fells summit on Sat 18th April 2009 and that was Blencathra so it took me only about 12.5 years to complete the book.

Thank you to all stations I worked. I would have liked to work more but safety came first.

Well done both for braving the elements. It’s nice when it’s over! Good to catch you on both from the comfort of my cosy home office. Congrats to Geoff for completing N Fells. I think with a bit of care WOTA is year-round, and I nearly always get out on the fells with the radio on 1 January for example. Good gear is absolutely vital. (Your experience on Great Calva inspired me to invest in an upgraded pair of waterproof overtrousers on Saturday afternoon!). 73, Phil

Congratulations Geoff. Sometimes it is good to have days like this, a true adventure! 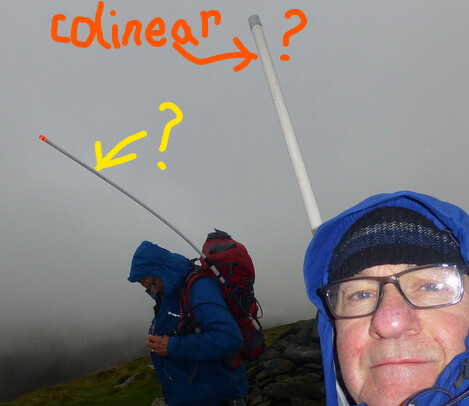 I’m always interested in /PM especially for inclement weather. What antennas did you use and were they effective?

Thank you for walking with me in atrocious conditions!! Still inspite of the conditions it was a good walk and i enjoyed it. Making sure you are both well equipped and dressed is so important. It was good to complete book 5 and many thanks to the chasers that worked us both. I would have liked to have spent more time on each summit but conditions did not allow that sadly. I looked at Dereks photo when he activated Great Calva and conditions look excellent!

I was using some Rohan over trousers which were expensive when i bought them many years ago but they do not let water through and neither do i get wet through sweating. In fact my main trousers that day are also Rohan and they are both waterproof and windproof. They have never let me down.

It was an adventure but a great one! I prefer to walk in good weather but as i have to plan walks in advance i have no control on the weather so just accept it!

You are right on the aerial. It is a base station collinear which is cable tied to my rucksack. I have used it for many years now and seems to work ok. I always monitor s20 while walking between summits so it is handy having an aerial like that. I think Reg’s aerial is a flowerpot type but he had radio problems that day. If the weather is good i sometimes use a j-pole aerial fixed to a roach pole.

Geoff
I’ve got to ask - do you have any ground plane arrangements for that rucksack colinear?
73, Phil

I dont!
I know it is not what you are supposed to do but it seems to work ok!

Whip antennas need a ground plane to radiate effectively. Apparently, a poor or no GP changes the radiation pattern to point more at the sky than at the horizon. We humans are big bags of mainly water and provide the GP when clutching the HT radio. I notice reception deteriorate if I no longer hold the HT.

I have a 2m/70cm collinear (Diamond X50) on my bungalow chimney which works very well despite my QTH being at 25m ASL. It has 3 short radials that stick out at the bottom which you could remove for /PM.

My Watson 6m/2m/70cm mobile whip (5/8th on 2m) works great with a magmount on the car. I’ve also bolted it to the metal pannier rack on my hybrid/gravel bike and tested it on high ground into a FARS 2m FM net and got good reports. I’ve thought about using it /PM for doing the moorland WOTAs (like in the Shap Fell area) where there’s no tricky ascent. Mark @M0NOM and Phil @G4OBK have more experience with mobile whips.

The J-pole should work well out of your rucksack because it has a built-in quarter-wave matching stub so doesn’t need a ground plane.

Well done both on this activation the weather was against you so made I was around to work you on the two summits. Great photos and congratulations Geoff on completing the Northern fells

Congratulations on completing the Northern Fells Geoff. Well done to you both.

One of THOSE days! I think our worst wet weather had to be coming back from Great Gable or Kirk Fell to Honister - I have never known rain (with wind) like it when walking - we had never been so wet. We tried to undress beneath the tailgate and threw all our walking clothes into a bin bag before climbing through into the car and changing into dry ones! We struggled to get them dry at Cockermouth Travelodge for the next day