Many of you will know it, the whole area around the summit is a densely-packed mature conifer plantation. Even at the small clearing at the summit trig point the very tall trees all around means LDO-083 has an indifferent VHF/UHF take-off. You even have to get creative erecting an HF antenna in the space - my 40/30/20 EFHW was okay in the past.

I have activated Claife Heights 3 or 4 times before; it’s usually a pleasant one-hour walk from Far Sawrey [to the south] albeit a bit boggy in places and with views overlooking Lake Windermere to the east. Today was very different. There has been widespread devastation of woodland and forests in Cumbria this winter and again a few weeks ago with the triple storms.

On previous activations this usually meant ducking under the tree trunks or making a small deviation around the fallen trees. Indeed, it started off that way but soon, not only the path and sides were covered in massive fallen trees but the whole hill side. It was totally impassable. 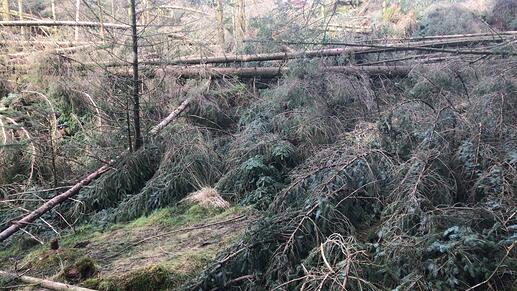 The path is somewhere under that carpet of downed trees

The map shows the final part of my usual route in green. 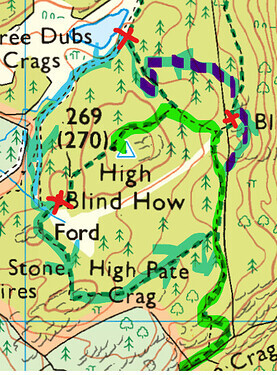 My little dog and I had to clamber over a drystone wall and bushwhack east then north across an area of smaller trees, very unpleasant and a bit dangerous trying to walk across the brash (mainly moss- and grass-covered old branches) left by the foresters when they cleared the area for planting the saplings. Then re-entering the main forest area was also very unpleasant stumbling between closely-planted conifers.

This took me ages [on the map, the blue/purple route 3 to 12 o’clock round the summit area] before I met the public path coming from the opposite direction. I headed towards the summit but my hopes were soon dashed again encountering more large fallen trees everywhere.

I came across some signs saying the trail is closed (red crosses on the map). No help for me [for the first two] as I came from the ‘wrong’ side of the signs. Fortunately, I encountered nothing blocking the forestry road and public footpath (to the west and south respectively of the summit) – blue on the map - and was able to re-join my original (green) route to go home.

I’m phlegmatic about carrying all my radio gear over rough terrain, getting close to the summit but not getting to activate it. But hey, the weather was sunny and dry, the non-bushwhacking parts of the walk were nice, and I had my wife’s home-baked banana cake to eat. Claife Height will still be there and the F.C. should get round to clearing the trees in a month or so [I’m sure they have higher priority emergency clearance jobs to do elsewhere]. Suggest you might want to postpone any planned outing there too.

Sorry to anyone who was hoping to work LDO-083 yesterday.

Grizedale pike was like that on the Whinlatter side before Christmas Andy. Fortunately there are lots of other ways to the summit. I also cam across a path closed sign but it was about 100m from my car on the descent on an open path, I reckon the others further up had been ‘misplaced’ by someone as there were a lot of fresh tracks about.

Occupational hazard I guess at this time of year, fingers crossed the worst of the winds are over now