This is a glorified if late activation announcement for 7 May! I have activated bits of the Kentmere Horseshoe previously, but as I start to close in on the WOTA 214 I really need to activate the rest! It’s a bit of a schlep to do Yoke, Ill Bell and Froswick, starting near Troutbeck and swinging back over Troutbeck Tongue, but one must suffer for one’s art. I’ll be accompanied by non-radio and long-suffering friend Mike (who is dead good on maps and such), so won’t be in long rag-chewing mode on 2m. But I hope there are some Chasers about, even if these chunky tops don’t get a SOTA badge. If not, Mike and I will have a jolly good leg stretch at least! These tops should provide very good paths on 2m into S Cumbria, Lancs and Wales, and contacts back over the Lakes into NE Cumbria and Scotland aren’t out of the question at all. NW Cumbria, GD, GI and EI might just work (propagation is a funny thing), but I must say haven’t had any contacts ‘out west’ across the Irish Sea for some time. At any rate, I look forward to catching a few folks tomorrow. 73, Phil M0AYB

Just to round things off, I successfully completed the above trip, with Mike on the old GPS to help pick ups some of the smaller tracks. Several stations contacted me on all four tops: special thanks to G1OHH (Sue); G7CDA (Dougie); and M0NOM (Mark); who did that and made sure I got some 2m contacts from little ole Troutbeck Tongue. Here’s me on Yoke. 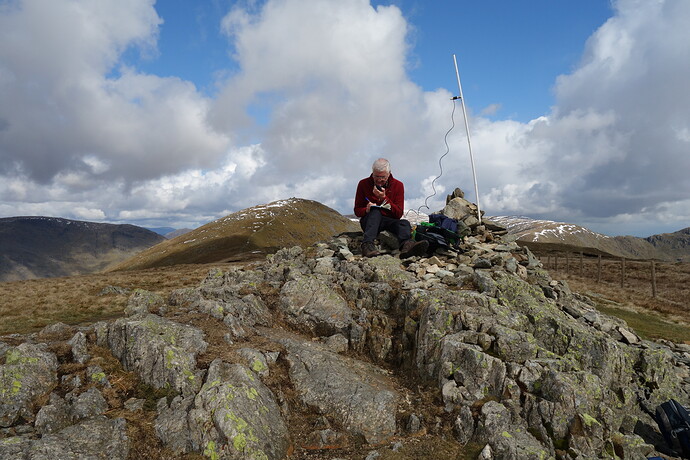 A feature today was the whacky weather. Although it’s a very cool May, we got overheated in the sunshine going up initially. However it was a bit intimidating seeing dark storms going on in the Central Lake District and we hoped they would pass us by. We didn’t get the worst of it, but for Ill Bell we got icy wind with quite determined hail. I made my 2m contacts with a short whip antenna - it was too windy and cold to fiddle about with the dipole. I said it was more snow than hail, so Mike called it snail. The feared whiteout failed to materialise, and we got sun again by Froswick.

Troutbeck Tongue turned out to be quite a nice little hill, if somewhat hemmed in. Rain as we set off down the valley didn’t last too long. That lot took almost 6 hours overall, including snack stops, radio and admiring the view!

PS - no contacts out over the Irish Sea again. However one into Scotland and two into Wales. One of the Welsh ones was GW4TQE/P, John (from all of my three biggest tops). Thinking about it, I realise I’ve now known the chap for about 55 years! He took over his father’s old callsign. He was on SOTA GW/MW-027 Moel y Golfa, west of Shrewsbury. I should also mention contacts with G8CPZ/P, Andy, who was almost within shouting distance across on Red Screes!. P

Good to hear you out and about Phil, and the ridge line that is Yoke, Ill Bell & Froswick is special to me. When I go out at lunch time on to Queen Adelaide’s hill up from the Millerground public jetties I have a great view up to Thornthwaite gap. On Thursday the area was quite well dusted in snow.