Ling Fell , and a reacquaintance with walking the hills

Saw a window in the weather this morning and decided to do a quick walk so posted an activation notice just before setting off for Ling Fell after calling in at Workington. There were a surprising number of cars parked and people making their way up when we arrived , and it was deceptively calm on the ascent up the sheltered side of the fell . On reaching the summit it was blowing some, and myself and Mrs MGO sat in a small gully out of the wind about 30 yds or so from the trig’ point. for a cup of tea .
I was a bit ahead of time , but put out a call on 2 meters and had a reply right away from Geoff over the other side of the Solway , and it was nice to work him for the first time , followed immediately by Reg, who originally aroused my interest in the WOTA/SOTA not long after I got licenced last Autumn. I’d only taken the hand held and decided to leave the antenna and poles I made at home as I knew it would be a quick trip, and after 20 minutes or so we could see the weather approaching from the West , so happy enough with two good contacts we headed down .
The radio has been a great catalyst for us to get back fell walking again after a couple of years where we have neglected it . I did my first activation on Muncaster fell a week or two ago which was one of our favourite walks, over the years and we realised what we’d been missing . It’s nice being able to pursue several outdoor interests at once . I enjoy photography ,wildlife and fishing too. so I can pack the binoculars and camera , there’s even room for the little Yaesu in the bag now too , so I’ve even managed a bit of " chasing " recently when the fish are playing hard to get.
Richard. 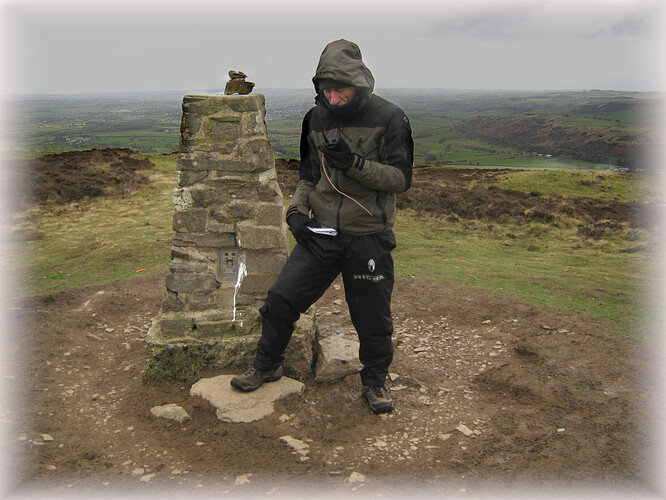 Welcome to WOTA! Many thanks for the contact today and it was nice to work you also for the first time.

It certainly sounded windy. When i did that summit with Reg and Steve last year it was blowing a hooley when were on the summit.

Congatulations on the new callsign as well. It is always good to have new amateurs. Look forward to working you again. I certainly hope to be out myself in the coming weeks.

Thanks Geoff,
It was nice to get you in the log book , no doubt catch you again particularly as the weather improves approaching Spring.
Enjoyed the walk today and just made it home before the weather onslaught began ! Good to get Reg on just after you too . .
73 s Richard .

That Nagoya 771 antenna seems a reasonable compromise for the remote antenna I made, when you have the height on the hills .with the wire counterpoise attached and it’s noticeably better than the token gesture of rubber duck that comes with the radio …Yes It’ll be good to do an activation as well.
I also logged Muncaster fell like you mentioned, as I’d contacted Matthew from the trig point on the way to the SOTA activation point.
Hopefully see you Wednesday evening.
Richard.

Good stuff, Richard. WOTA is a great scheme and you can get a lot out of it.

I wholeheartedly agree that it’s great to do more in the fells than stomp from A to B, as most hikers do. I often take a handheld, with or without a separate antenna; and/or a decent camera for some considered photography; and/or some good but compact binoculars (highly recommended to get the most out of a trip); and/or some geology map stuff.

I look forward to lots of contacts with you (even if I missed you on Ling Fell).

Thank you Phil
I’ll be listening . Yes there’s so much of interest in the outdoors it pays to make the most of it all.
When I got the licence last October , I imagined myself sitting in the house mic in hand with a HF set talking to people far away and overseas , but I bought a hand held vhf/uhf for the time being , then I found out about SOTA and WOTA and have to say I’m enjoying 2m 70cm generally at present and experimenting with my aerials.
Cheers 73 s Richard