At lunchtime today Alex and I went for a quick dash up Reston Scar from the quickest route out of Staveley: 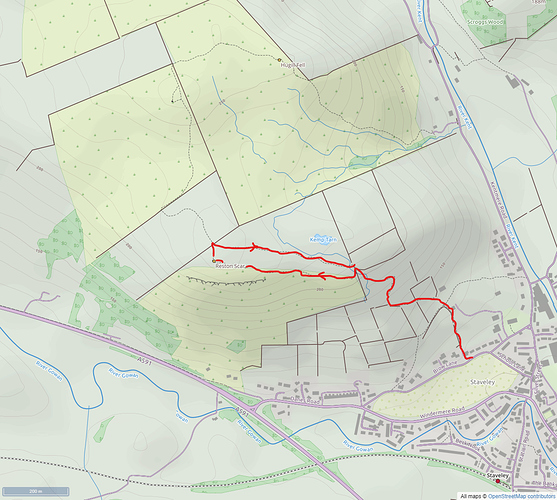 The ascent is initially via a tarmac farm track then onto an aggregate track and then finally across the scar itself.

The Southern route has quite a steep drop off in places - so if you don’t fancy that the Northerly route we took back is fine and well marked. If you take the Northerly route you have to go slightly past the summit to gain access to a stile across the wire fence that the Southerly route tracks. Total ascent time was around 20 minutes. 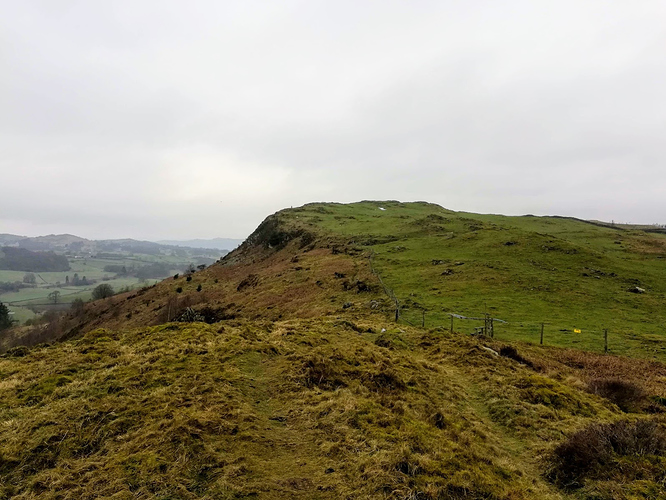 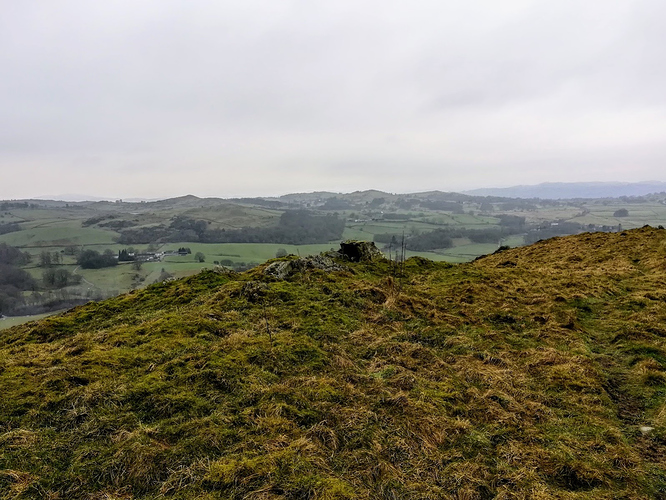 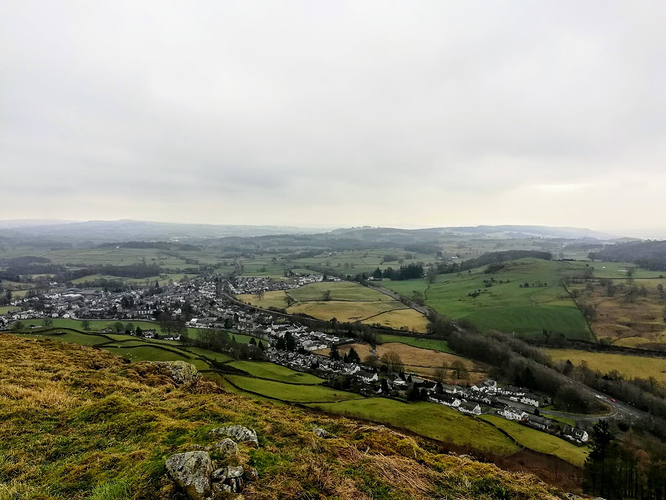 On the summit I setup the 2m Sandpiper Delta Quad which push fits on to an old broken 8m fishing pole. This antenna is very compact for a 2m antenna and can very easily be used vertically or horizontally. I was using the FT-857 attached to a camera harness which holds it securely to my chest and subsequently, with the pole in the crook of my arm, allows me to activate one-handed - with the other free for logging. Not one to try in high winds, but it makes changing the direction of the antenna trivial by spinning the pole and of course dropping it to change the polarisation is very straightforward to do. I set the FT-857 to 50 watts, powered by a 4200mAH 4-cell LifePO battery in my pocket. 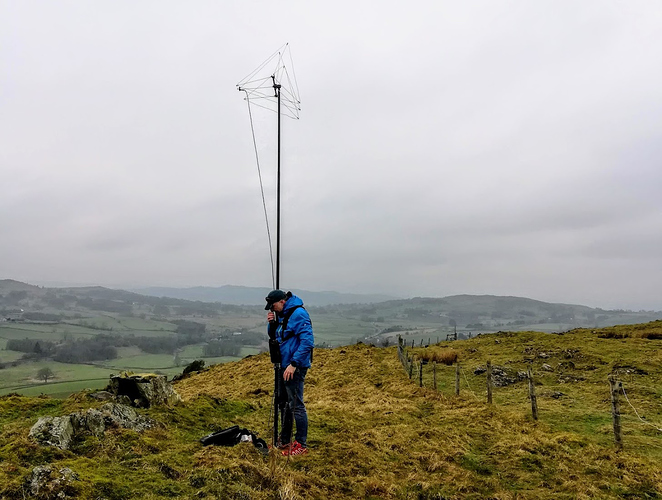 The activation on 2M FM was straightforward with Sue G1OHH and Douggie G7CDA providing excellent chaser services as always! Also great to get Derek 2E0MIX in the log and quite surprising on 2M FM given the associated profile (I don’t know Derek’s exact address but I’m sure there is plenty in the way regardless!): 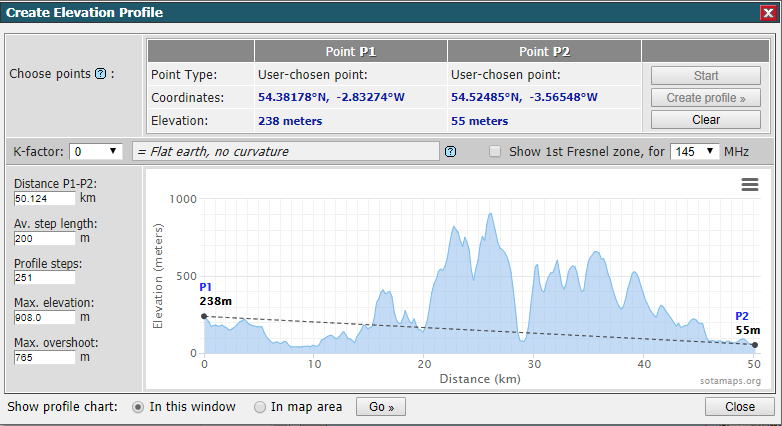 I then switched to 2M SSB and Derek’s signal improved from 55 to 58. The Delta Quad polarisation was vertical for the other contacts too - Brian G4ZRP on the Wirral, Tony G7OEM in Blackpool and then just barely moving the meter MW0ISC near Mould. This last contact looks impressive as well in profile form with a solid 137km distance: 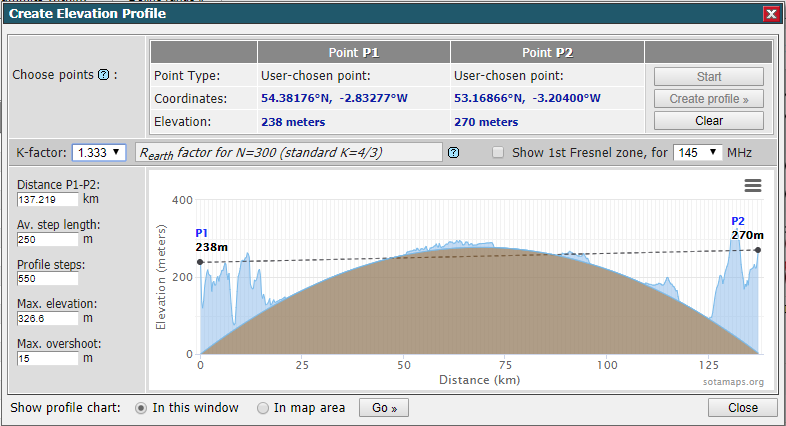 Once the Delta Quad was packed up I decided to give the backpack pedestrian-mobile setup a go again. I connected the FT-857 up to the 5/8 military whip - mounted on an N-Type connector at the top of a piece of Electrical PVC conduit strapped to the side of the rucksack with a short length of RG58 terminating in a BNC connection. I turned the power down to 20 watts and called CQ as we left the summit and it was then great to have a 10 minute conversation with Chris 2E0MOW at Poulton. This worked really well and I continued to wear the FT-857 in harness all the way down to the bottom without it causing any issues, so for activations where I need to make progress to cover multiple Wainwrights this might be the way to go! 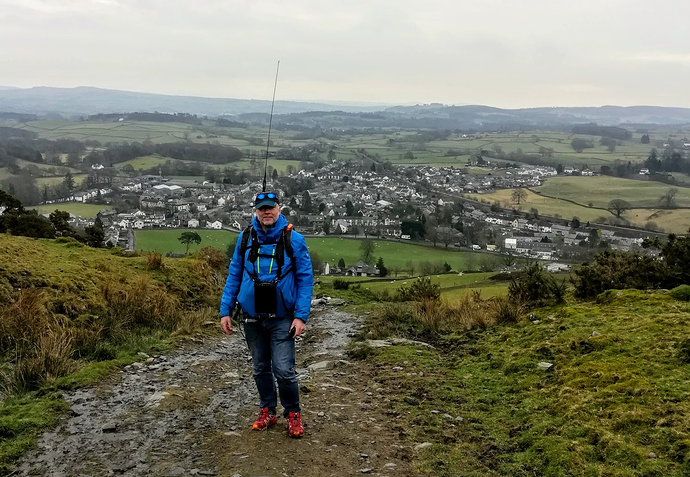 Many thanks to all the chasers. I think it was Tony that mentioned he likes 2m SSB - I have to say I have a soft-spot for VHF SSB also.

I didn’t have time today to continue on to either of the two other obvious summits Hugill Fell or High Knott. When I did these as a three together, one evening a couple of years ago I remember having to negotiate a wall (possibly down to bad planning). I will however come back to do both - probably via the obvious separate ascents from the Kentmere Road however.

Mark said:
I didn’t have time today to continue on to either of the two other obvious summits When I did these as a three together, one evening a couple of years ago I remember having to negotiate a wall (possibly down to bad planning). I will however come back to do both - probably via the obvious separate ascents from the Kentmere Road however.

High Knott or Williamson’s Monument as it is known by some! An unforgettable activation by four of us in in March 2012 when we shared rooms and beds at the Kendal Travelodge - 2012 G4OBK, M0PYG, G0VWP, G4OOE when we met the landowner “head on” after a sprint, there was no escape! 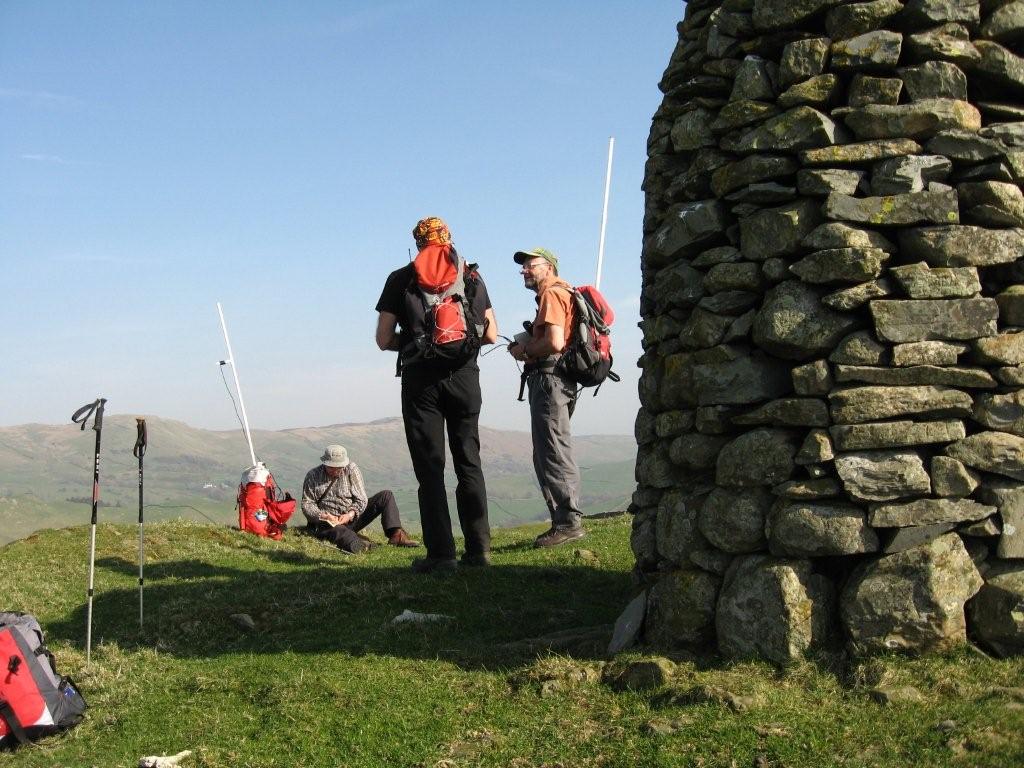 Good pics Mark - I did listen for you in FM & SSB but with The Calf / Arant Haw ridge slap bang in the way there was no chance of a QSO through it to Pickering.

Thanks for listening Phil, I think with a lift we might have had a chance but the weather turned just as we got back to the car so there was definitely plenty of precipitation in the air.

I have worked Reston Scar from my work in Penrith twice. Unfortunately because i am in Carlisle i could not hear you. I did listen but not surprisingly nothing! It looks like a fairly easy walk.