There be aliens in them hills

I was delighted when the eldest, Jude, agreed to come out walking with me today. I envisaged a full day, just me the lad, walking and talking… I should have know better. With earphones in, he walked towards the car. Good job I noticed, as I headed back in to get my own. In the end it turned out better than I was expecting at that point, but at least I was prepared!

My route can be viewed here.

We set of for Longlands, and on route, heard Mark @M0NOM on Thunacar Knott, but failed to break in for a contact. I had considered stopping where his signal was strong to make sure of a contact, but time was marching on and we should have been on the fells by then.

There was just one car parking space available when we arrived, or so we though, Once parked up and getting boots etc. on, another car pulled up with a drive exhibiting far more ambition that I, and parked where I would have never considered a spot to exist. It was not antisocial parking, just wow, well done sort of parking. As they were about I refrained from taking a photo, and they were gone when we returned, so you’ll just have to conjure up an image on your own

We set off, Jude at a pace I would never sustain, but fortunately a few bogs early on brought is back together quickly, for me at about 0.5km in to think, “Where are my car keys?”. Oh yes, I remembered, Jude had them. “Jude”, I said, “did you lock the car?”. 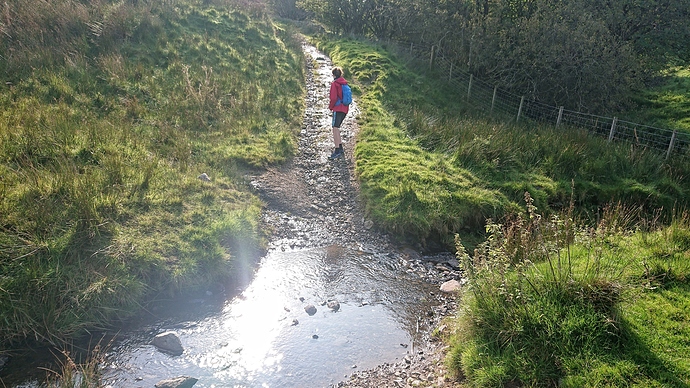 There is no need to disclose the response save to say that it took him about 30 min to catch me back up as I continued walking the gentile path towards Trusmadoor. 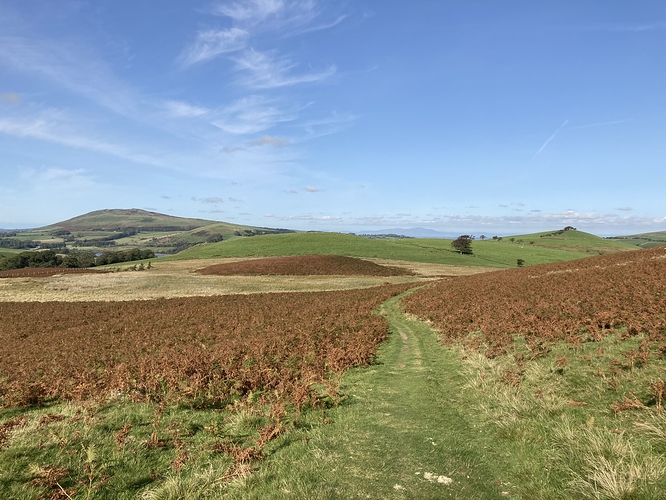 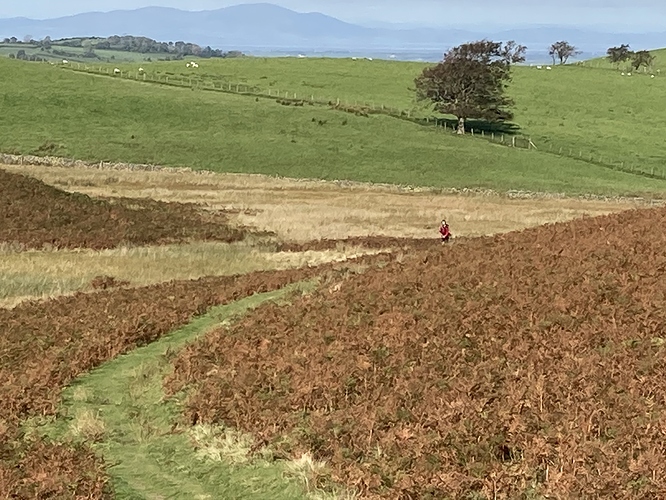 When we re-grouped, Jude took charge of the navigation, and rather than continue as I had planned towards Burntod Gill, we crossed the stream (Ellen) and continued West for some time, before turning left and then ascending to Great Cockup from the North, rather than from the East via Trusmadoor. By this time my left knee and hip made it clear I would be punished for the rest of the walk 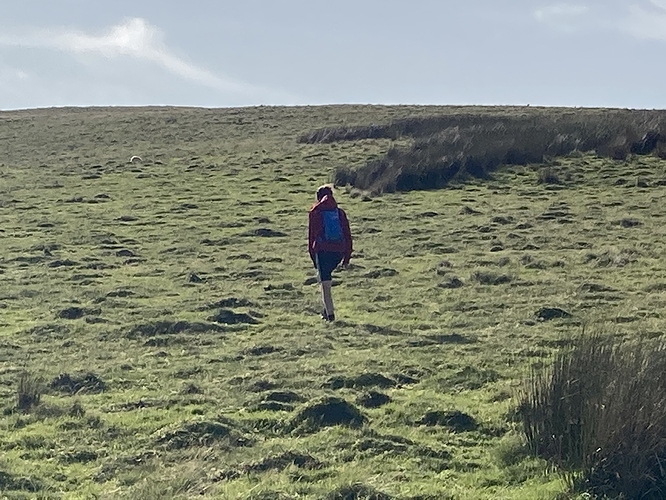 Jude had set a blistering pace, disappearing on more than one occasion only to reappear waving his arms to ensure I followed. We arrived at Great Cockup, as anticipated, having set off 30min later than expected. Good work Jude. Well when I say we, I arrived to be greeted by this… 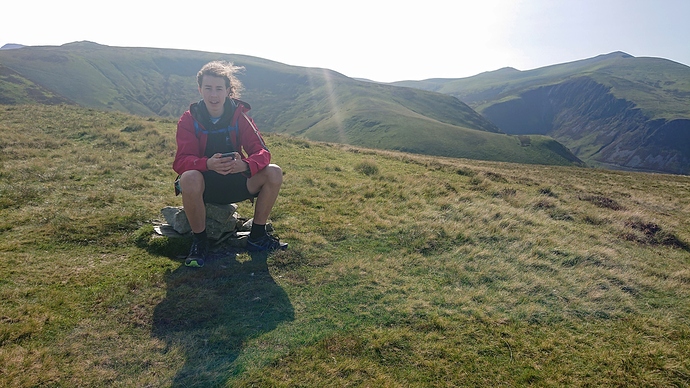 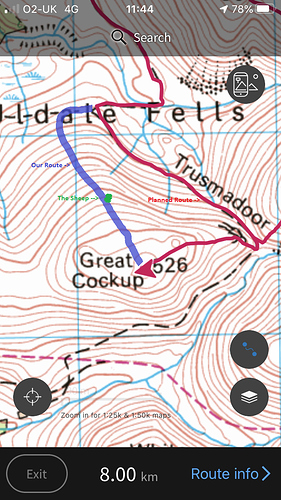 We had a little company on the fell during the activation, with everyone doing a good job of exhibiting genuine interest in what I was up to. Of course, I’ll never know if they giggled when they walked off

We set of for Meal Fell, and had a lovey time in the process. Jude was getting more into what we were doing, where we were going, we chatted away most of the way there. It was a fairly simple affair, just one wrong turn, quickly correct by the boy, he was on full time navigation duties at this point. 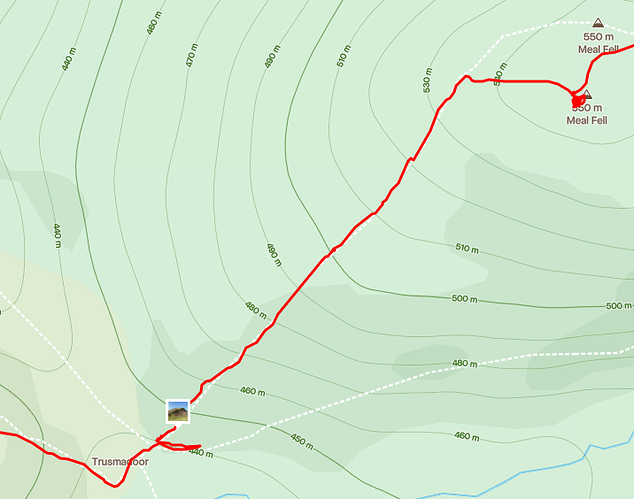 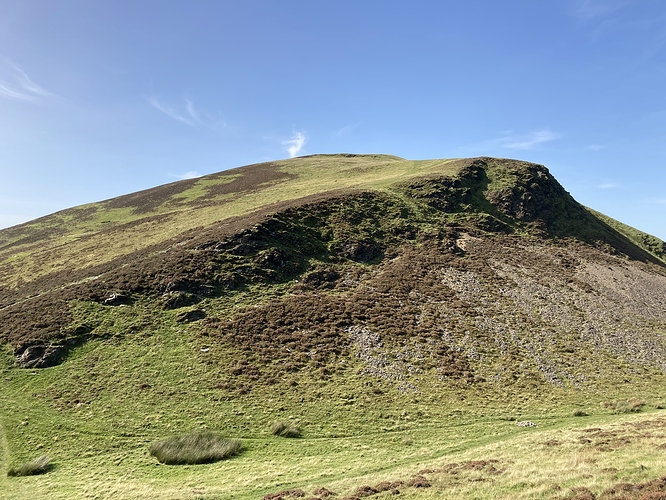 I can’t find any photos we took on Meal Fell unfortunately, but it was a large summit from what I can remember, with two cairns. We headed for the larger of the two, set up in the wind, called CQ bang on 13h00 and experienced very strange conditions. Whilst everyone could hear me 59 - 59+60, I was really struggling to pull voices out from the noise. It really was dreadful, and yet worse and stranger was yet to come. 6 QSO’s recorded.

I could hear Malcolm’s voice M6MOS but not a word he was saying. Also thought I heard M6IIE/P, but never got a response. Reg @2e0ldf had popped out in the car to say hello to @Dave_M6VID, who was still doing a good job of keeping me going!

We had our Lunch, packed up and headed off. This would not be the last time Jude was on this summit…

As we started out assent towards Great Sca Fell, I said, “Jude, where’s my hat!”. Well, they say a picture tells a thousand words… 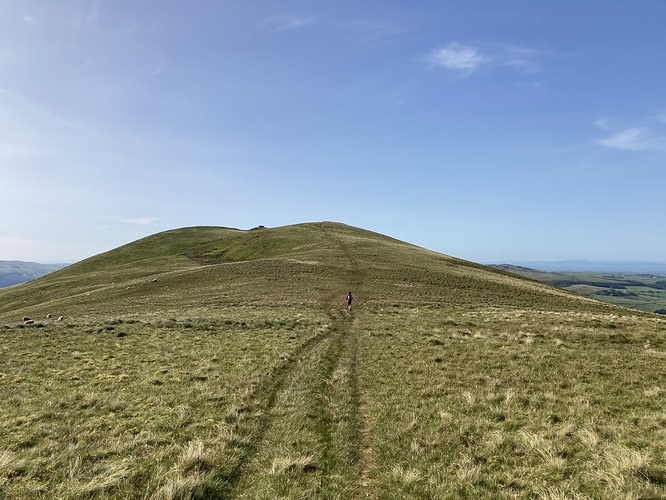 I had only got about half way up when he was back with my hat. We arrived at Great Sca Fell not long after 14h10 and began setting up. Jude was getting more involved, and by this time the wind had really picked up and I was very grateful. 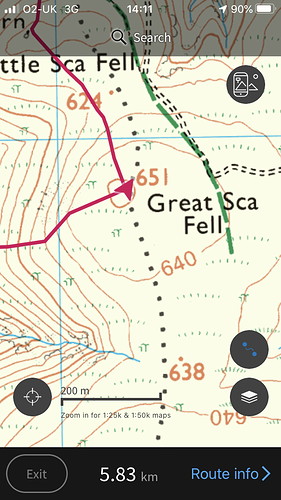 Getting ready to operate. Jude was kind enough to hold the fishing pole for me this time. 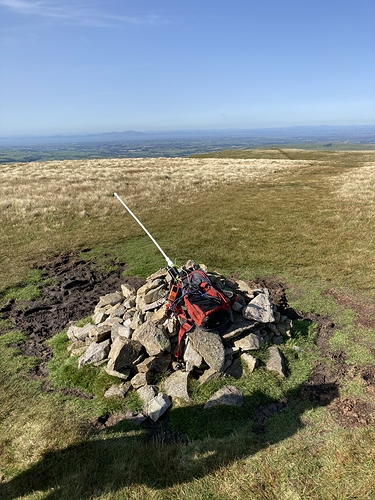 Contacts were much easier here, the additional 100m or so of altitude no doubt helped, but again I was advised of stations calling me that I could not hear. Just 5 this time; 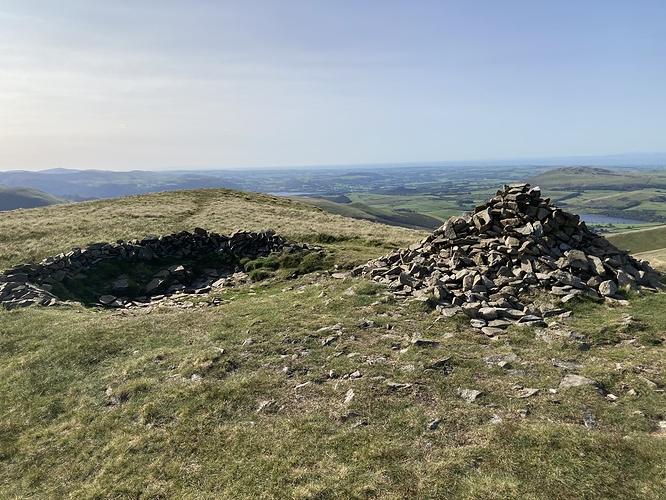 I did not get Reg or Mike on Great Sca Fell, but I did just hear Reg and Mike start a QSO shortly after we set off. What was strange was, although I could hear Mike, I could not hear Reg at all. We spoke for a while on route and then as if by magic, Reg was coming in 59 no problem. Even stranger, as we approach the Cairn, both Mike and Reg vanished, so I went back about 10m and bingo, there they were again. I jumped in just as they were considering heading back to S20 to listen for me, so we started on S21 and activated Brae Fell. It was windy, so just held the antenna etc., but I did pose for a shot… 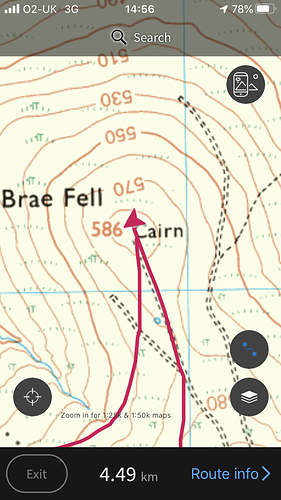 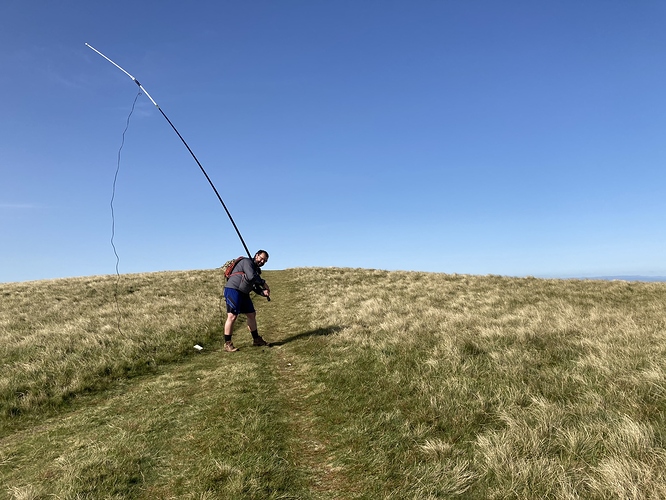 Again contacts not great on this fell, but even worse was to come.

We set off for Longlands, via Lowthwaite Fell. The views were fantastic, the wind very strong, and my knees ready to go on strike! 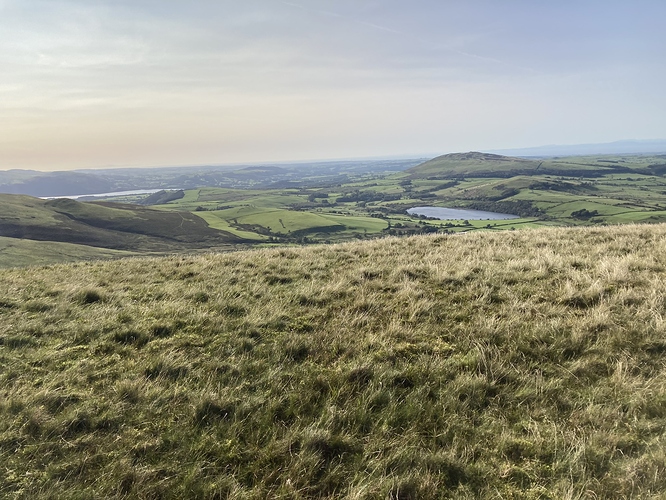 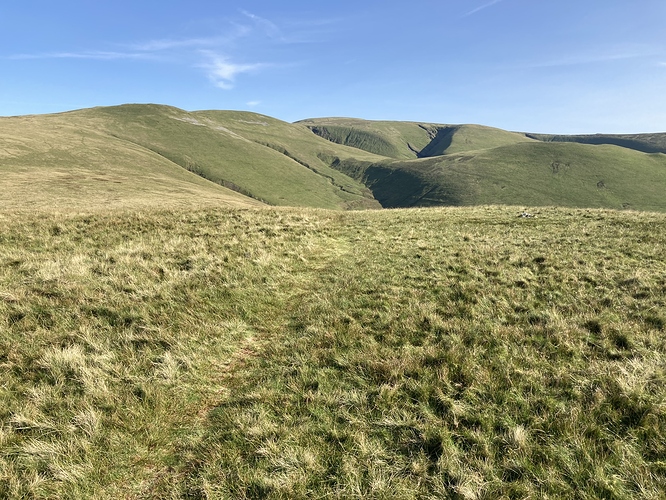 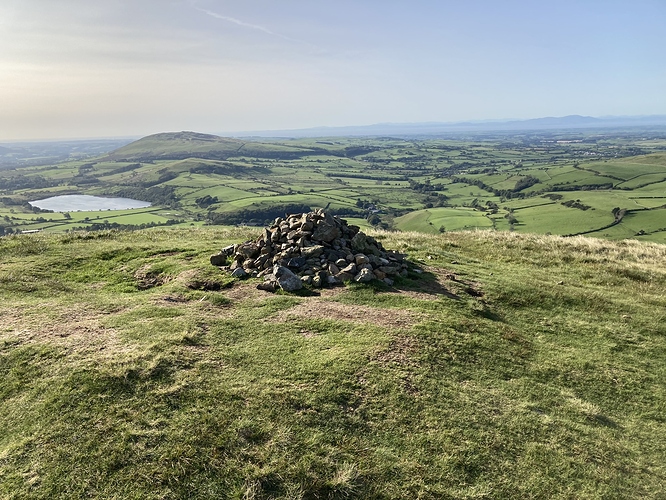 Only 2 contacts. Fortunately David was relatively strong, but I still struggled. Mike persisted with me for what felt like forever, but we eventually exchange reports. It must have been maddening, as I was 59+60 with him! I’ve decided, there must be aliens in these hills - what else could it be?

We set of the long way back, anything to soften the gradient. 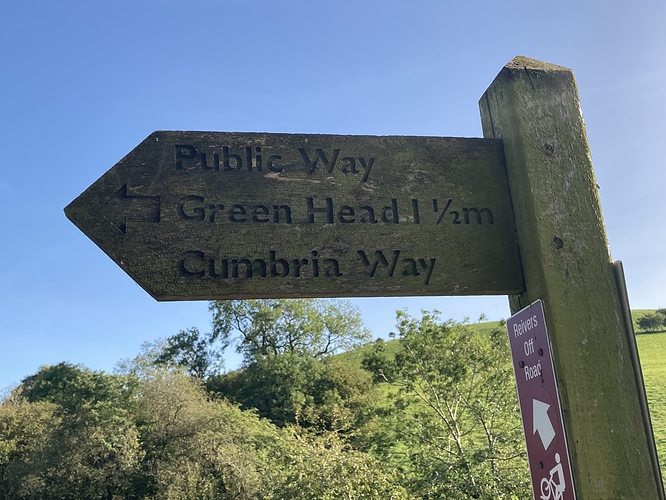 Thanks for all the contacts today, much appreciated. I’ll log the tomorrow.

Great wright up Steve you both had a fun action packed day…very strange on how that you were been heard but you could not hear others at times.
Good to see photos and the lay of the land for when I tackle this route…well done both

Thanks for all the contacts. I could not make contact with Reg when he did Longlands a couple of years ago and he was also 59 +60. I can only think it depends on the radio you are using. Some i think are very susceptable to overloading. When Phil and myself did Longlands over 10 years ago i used an FT-60 and Phil on a VX-170 and we never suffered breakthrough.

Steve, isn’t it strange how you had a very different experience on the fells to me, on the same day? It’s a shame we didn’t manage a S2S contact, ships in the night clearly.

Conditions were generally strange, as you’ll see from my write-up, there was definitely tropo lift, Pavey Ark gave me a contact into Grantham and France!

Thanks for taking the time to share your day with us.
Mark. M0NOM

Looking forward to reading it Mark. All the best ideas come after the event. We could have tried 70cm. Could have tried a smaller antenna. Most folk think it’s the nearby transmitters. It might be worth also having a go with a mobile rig at some point, once I’ve bagged my 2E0…