There are some Wainwrights where I think I won’t bother doing that one again. But these ones on the east side of Coniston Water are pleasant easy walking and I’ve been back every year to re-walk them. In the past, I’ve included Top O’Selside LDO-064 (SOTA G/LD-048) which is very close by, but I did it in May and – as often the case – was having to minimize my time away from home.

There’s plenty of room to park at the side of the road just past the entrance to the Water Park Lakeland Adventure Centre. After taking a shortcut (to avoid walking down to High Nibthwaite) I joined the wide and rocky main path heading north east. Be careful not to daydream as I did and walk right pass the indistinct grassy path on the right up to High Light Haw. The weather was sunny and dry but with a cold breeze. No real shelter on these smaller summits so I sat on the leeside of rocks.

The views (and hence the VHF take-off) are excellent so I used the Diamond RH770 ½-wave whip with my 5W FT1D 2m FM HT rather than mess around with the J-pole.

Strong signals from Douggie G7CDA and Sue G1OHH in Lancaster – not surprising, probably line of sight as I could see right down the Lancashire coast bathed in late-morning sunshine. Also got Dave G6AEK/M who was parked in St. Anne’s on Sea. 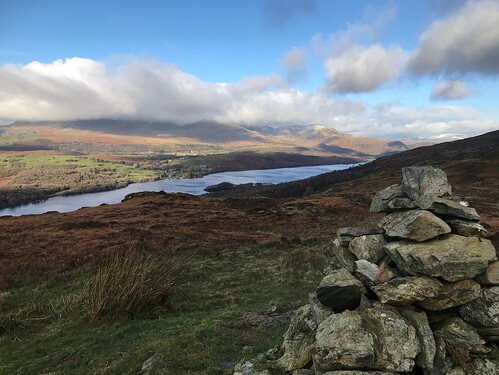 Only a slightly longer walk to my third and final summit, Brock Barrow. Just when I was thinking how good the weather was, clouds rushed over for a shower of rain. Worked Douggie and Sue. 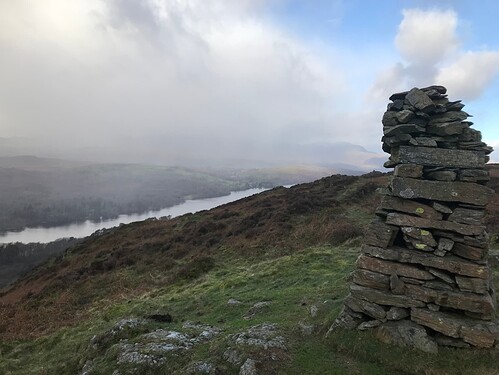 Put on my over-trousers only to find it stopped raining but then a lovely rainbow appeared over Coniston Water. 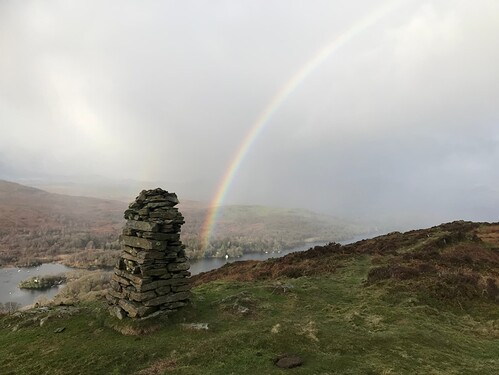 The OS map shows a footpath going SW down a very steep descent which I avoided especially as the ground was wet now. Instead, I went due south for a bit and joined a public footpath which initially goes due east, then SE before joining another public footpath going west by the side of Caws Beck. I didn’t mind the extra distance as the walking was pleasant.

Thanks to all chasers.