Well, what a day - I’m goosed. The kids, on the other hand, not tired and won’t go to bed… lol

I’ll start at the end this time. 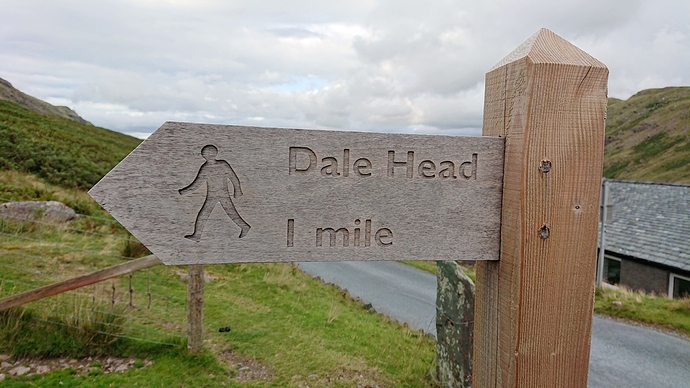 DSC_0734 (1)5333×3000 1.25 MB
Was I pleased to see that sign or what? 90min later than I expected, but we made it. Well, the kids made it much sooner, and were waiting for me in the car having made use of the facilities at the mine. When checking back, I’d messed up my planning between UTC and BST - I now know you can’t leave Robinson before you arrive! And to think I was feeling smug hitting all the submits as planned. What a wally. There must have been 100’s of WOTA exchanges today, and HEMA’s and SOTA’s. The radio was never quiet. I returned with the battery showing 40% charge remaining, jumped in the car and as soon as we got a phone signal got our order in with the Chippy for tea. Well, back to the beginning…

We arrived at Honister to set off at 12h00 BST as planned. Whilst subject to light rain at the time, we held fast and set off to perhaps one of the few times the forecast had it bang on. The cloud lifted as we ascended Dale Head, I expect to get away from my warring kids! They shall accompany me again - for good luck

15 min into the climb, and with the first contact in the book (M3TMX/P, Jordan, on G/LD-058), we took one last look at the car, we would not see it again for sometime. 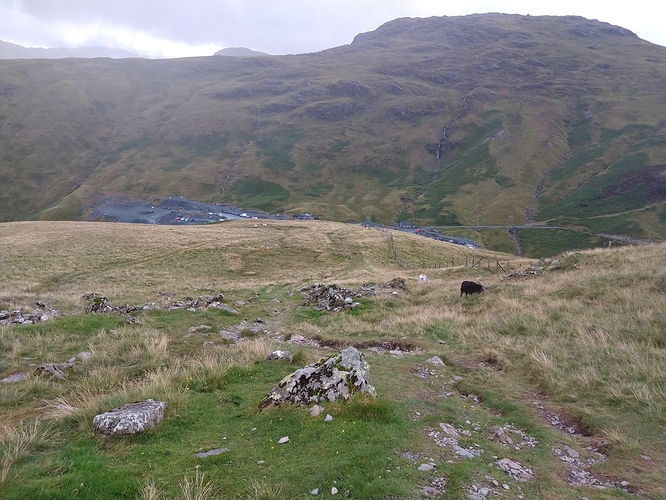 10 min later, a welcome rest arrived by way of GW7LAS/P on HEMA GW/HNW-044 - Moel Fodiar. (Looking at the map, that’s a mad distance!) The climb continued. I was gasping most of the time, wearing a lightweight shirt and shorts, boiling away, listening to the kids rummaging through their rucksacks for extra layers! The clouds continued to lift, as I exchanged pleasantries with folk who had set off from Buttermere much earlier in the day. Whilst I explained the plumbing reaching skyward from my rucksack, their delightful dog kept dropping large stones at my feet to throw. Never played fetch with rocks before! 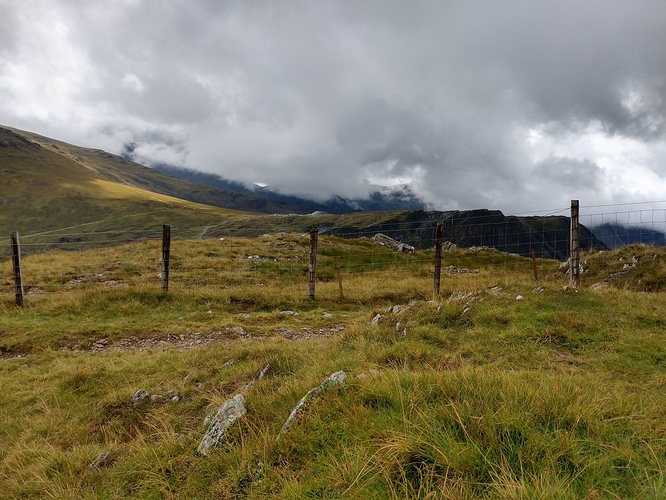 Bang on time we arrived at the summit of Dale Head. We had caught the cloud up, but it would get away from us for the remainder of the day in no time. 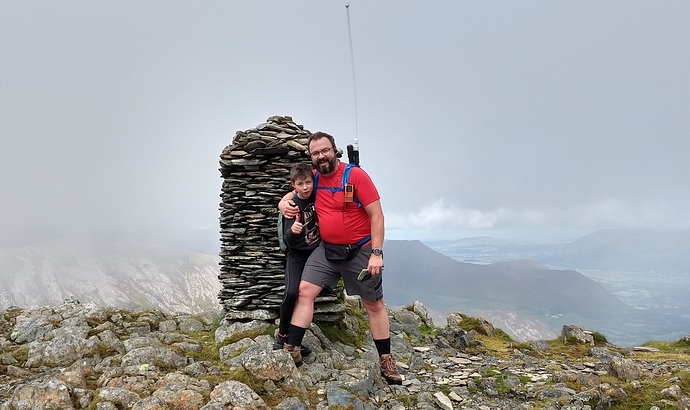 We were treated to this amazing view. 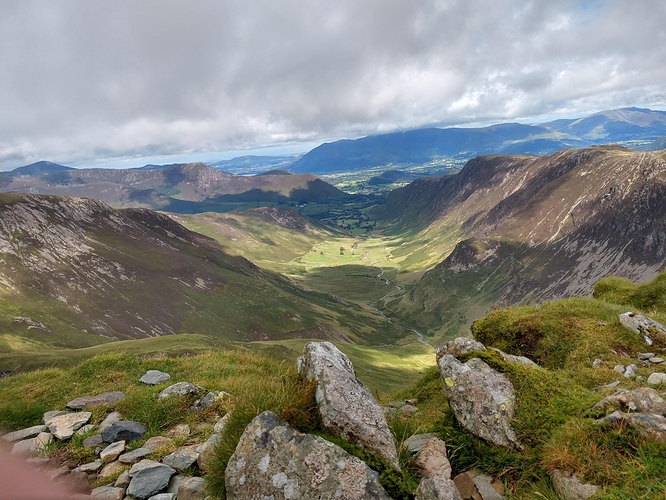 IMG_20200802_131854618_HDR4032×3024 1.66 MB
I did not know it at the time, but I believe it’s a view down the valley towards Stair? Anyway, we set up, I installed the children into their electronics - it was touch and go for a moment as we searched the best signal, and I, scanned the bands to find Richard? GW1HAX/P? on HEMA GW/HNW-024 - Foel Ddu? (I need to improve my logging). Then over to CQ on, unusually for me S20 - I’d remembered to turn the second VFO off to save my confusion! Well, that’s a first for me, so here goes… Derek opened the batting, followed by Geoff and on and on. After months of folk asking if I had made contact with Sue, and heard others doing so from my home QTH, I can finally say, yes, I have. Fantastic. Thanks to;

A fantastic 30 mins. I knew that Reg (2E0LDF) was trying me, but I could not hear - Sorry Reg. Thanks all. It was time to pack-up and go. This takes some effort, as the side cutters are in the youngest bag - I have to keep my zips closed on the rucksack with cable-ties - the water bottles and food travel with the eldest, the sitting towel and jacket (need something better) - go everywhere so we have fun later on with who has what and what did or did not get left behind etc. We must be the noisiest walkers in the Lakes!

Shortly after setting off for Hindscarth, we were treated to this magnificent view towards Buttermere. It reminded me of the time I overtook Porsche descending Honister for it to catch me up as I approached the right turn to pedal up Newlands. Must have been a Tourist enjoying the scenery, as a clapped out Nova that I’d also passed on the descent, overtook me again long before we reached the Lake. 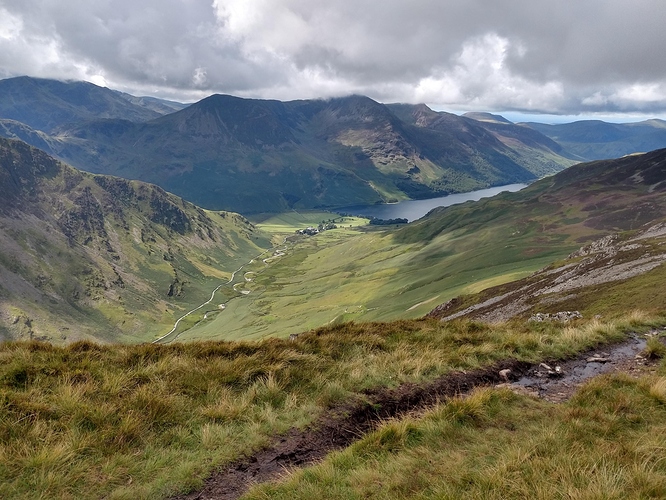 Around 14h10 BST we arrived at Hindscarth, and I made contact with Richard on HEMA GW/HNW-024 - Foel Ddu for a S2S. So confident I was I, I made no attempt to record his call-sign - so fingers crossed I got it right earlier in the day! 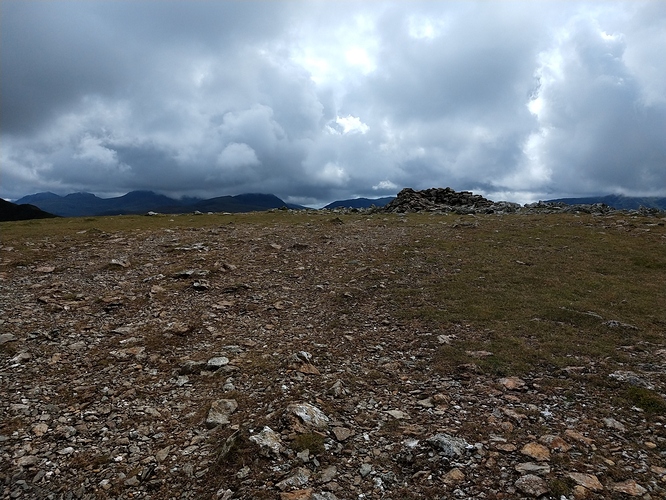 I was all set up at 13:15z and Geoff came in first amongst many others, with Karl not far behind… Thanks to;

Apologies to all regards the nightmare that was my intermittent signal. I tracked it down to the connection to the radio being loose. If that’s all that goes wrong, then I’m a lucky so and so.

Spoke to Mark (M0NOM/P) again at 14:00z, but can’t think for the life of me why - should I have recorded a summit reference? Well, perhaps Mark knows? I sure don’t

Off again, Robinson in our sights. I pleasant walk down, and then rather tougher headed up the hill. I spoke to a gentleman from Keswick on the assent, but did not retrieve my notebook to record his call-sign, I’m sure we will speak again, at least I hope so as it was an enjoyable distraction from two kids trying to find the sharpest stones to attack each other with

! I can think of worse places to be miserable for a moment… 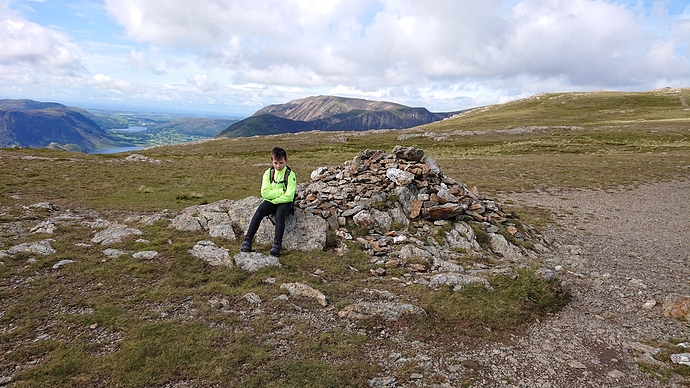 We arrived and could, as promised, make out last weeks summits of Knott Rig and Ard Crags. Little Luke could hardly believe his eyes, “Did I walk that”, he shouted - as loud as he could, just in case anyone in Manchester was wondering! lol. Think I’ve just remembered, spoke to Mark about our progress towards Robinson for a S-S. They way my mind works would baffle aliens! 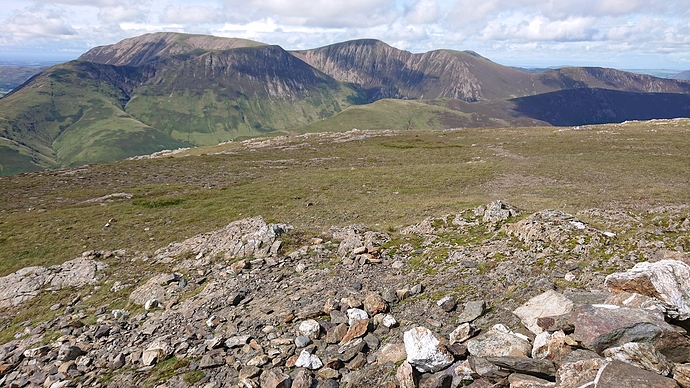 I set up shop and battled on with the wind, while Luke gave me the thumbs up. 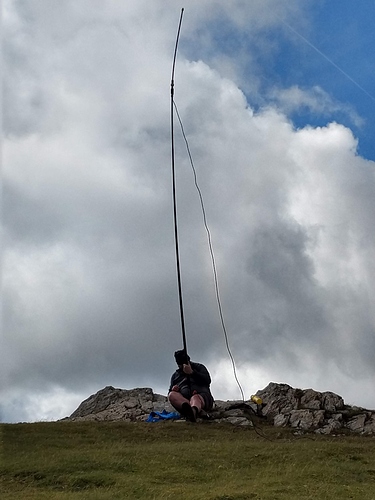 We packed up and set off back. At this point we realised, my 6pm finish was not possible. My planning showed us arriving at 3:45pm BST, and leaving at 3:40pm BST. Now, I did click my heals at this point in blind panic. One failure lead to another, as we ran around looking for a signal to send the, “Sorry, I’m and idiot, and we won’t be home until 7pm” message. With that taken care of, off we went. Again, fantastic views all the way back.

A few more contacts on the walk back. Mark again M0NOM/P on G/LD-012 or 129 @ 16:10z (I don’t think it was any of them now that I’ve looked) and Graeme M0OAT/P on G/LD-004, Skiddaw @ 16:25z. Graeme was also playing C4FM and I must admit I was enjoying the tones! We met some fell runners back at Dale Head, who had been wondering what that pipe was coming towards them!

I really struggled on the descent. I’ve noticed the up hills result in a panting ball of wet, whilst the down hill is very much a case of everything just hurts! As I mentioned before, once I could see the path to the car, the kids were set free and ran down the final section that took me easily 20 min. We were now 90 min behind plan, no phone signal, and very hungry. I was so pleased to so this… 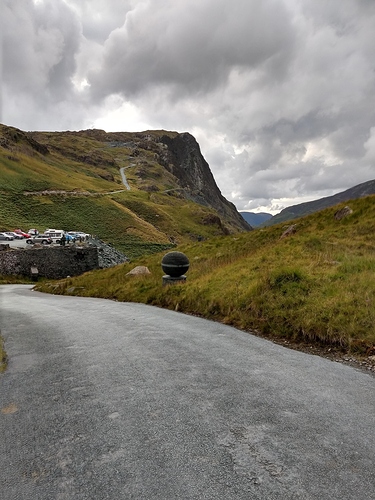 I’ve no idea what is install for tomorrow, but I’m sure it’s going to hurt every step of the way… 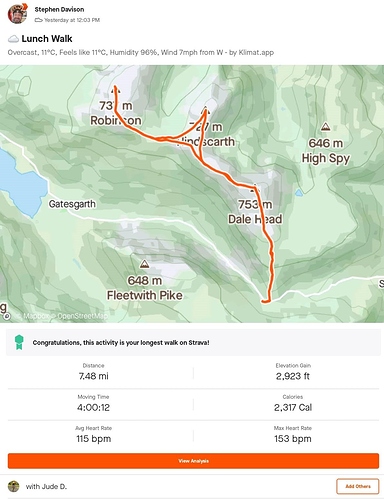 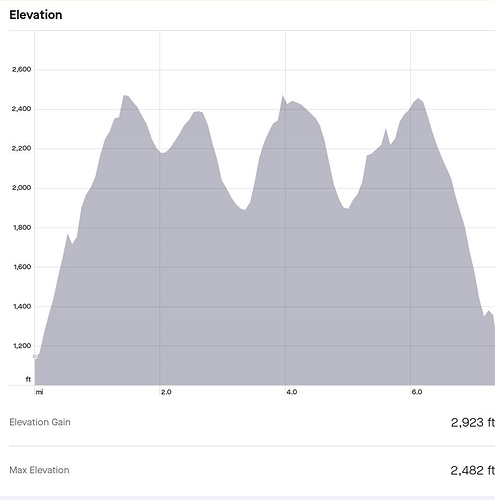 I’ll enter the logs in the morning, right now it’s off to bed with a full belly and throbbing feet.

Always enjoy an entertaining report! Great to have company on my trek out. My time keeping has always been terrible as well - ‘back by lunchtime’ being a favourite of mine, usually around 3pm. However my wife who has accompanied me on some of the longer outings lately I think has a better understanding of just how difficult it is to provide an accurate answer. I got back to Honister after 9pm last night!

I’m afraid it was some drinks for me last night, but I will post about my 3 days of summits later today.

Congratulations on the outing!

p.s. as I mentioned it is worth making use of CSV logging if you have a lot of entries to add to the WOTA site, and if you haven’t picked some logging software yet I recommend Fast Log Entry. For WOTA summits that aren’t SOTA summits, I switch Fast Log Entry to SOTA logging, enter mysota as g/ld-999, export the SOTA CSV file then manually edit g/ld-999 in the CSV file to the WOTA summit reference, eg LDW-065. The CSV logging facility recognises the WOTA summit and imports accordingly.

Looking for something to do tomorrow!

Had a great day.

I’ll look into that software.

…I also need to sort out my logging because mine is terrible. Looks like the antenna is working good