Whilst Steve was on Whinlatter we took a trip out on Sunday to the most Southerly outlying fell of Humphrey Head. 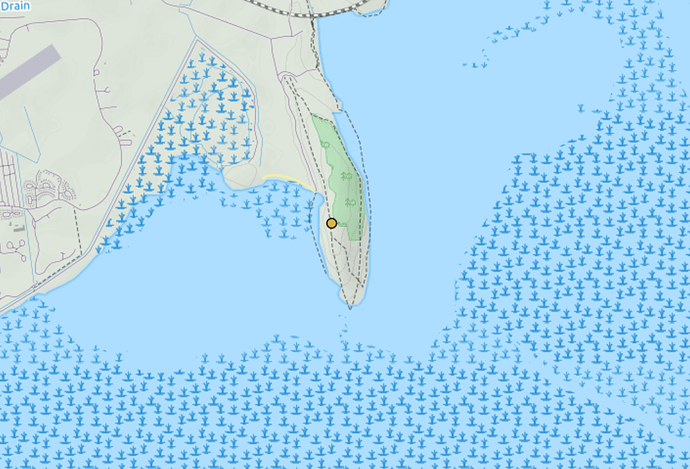 I won’t do an equipment list this time, I took the FT-857 with me, with LifePo4 battery and SOTAbeams QuadBand dipole, this time with the heavier SOTABeams 10m ‘compact’ travel mast.

Last time we were here in July 2019 we didn’t manage to get round the head to ascend from the South, and by pure coincidence the tide was coming in when we arrived again, so we have yet to manage to traverse the Westerly tip of the head once again!

Just to add some detail. When the tide is out you can walk from the car park along the westerly flank of the head to the southern tip, then ascend the head from there.

It looks like if you are at the Southerly tip when the tide comes in you are OK, as you can make it up the head, but somewhere in between the car park and the tip on the westerly side you’ve got to be careful if you don’t want to get wet!

The tide comes in pretty sharpish - a lady we spoke to said they sound a horn, I noted in the channel next to the footpath that it was coming in at running pace in the centre of the channel. 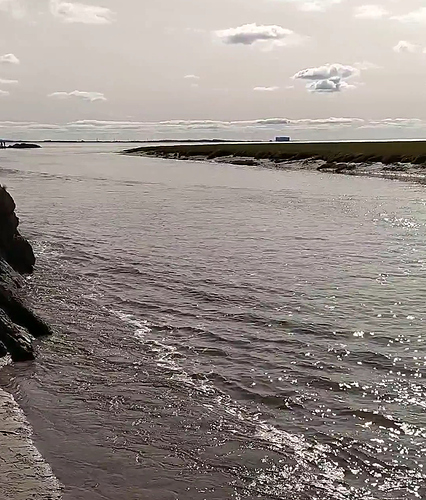 So, instead, we took the path up that we did last time - just at the entrance to the car park is a short, sharp ascent through the woods that is probably 10 minutes in total. I wouldn’t want to do it in the wet, and there is a little rock scrambling at the end, but it is pretty much over before you begin. 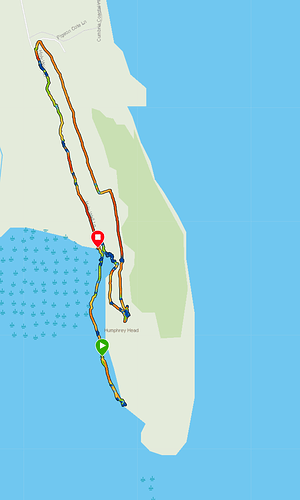 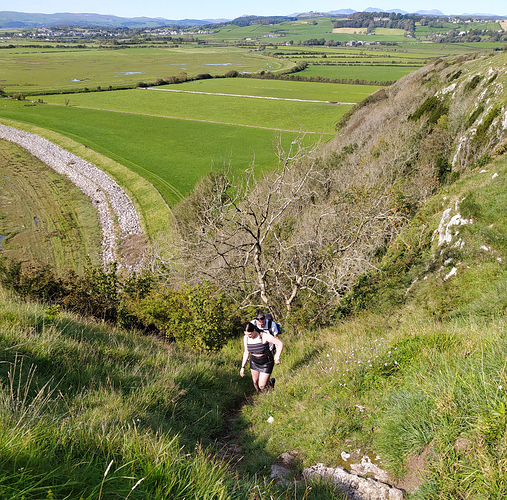 You end up on the other side of a fence to the trig point/main part of the head. If you walk along the fence you come to a gate - but it is locked, so the only option is to climb the gate. 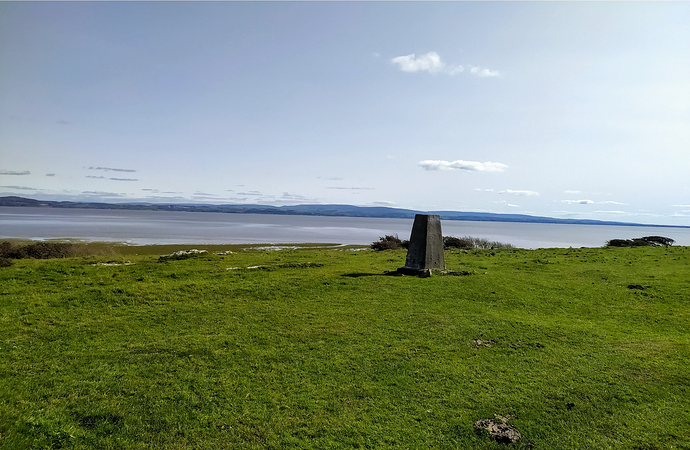 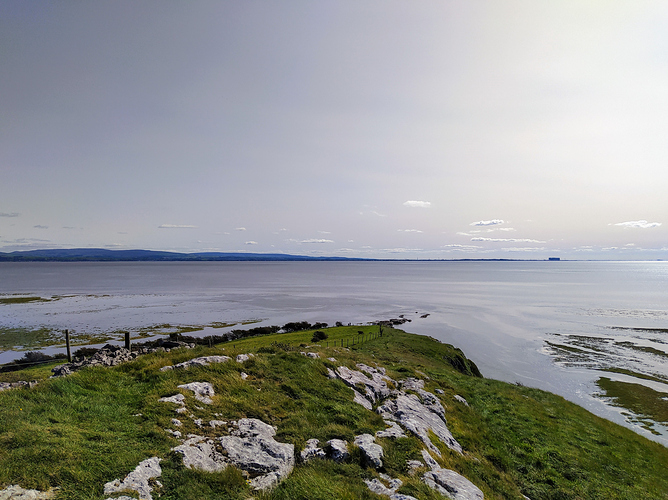 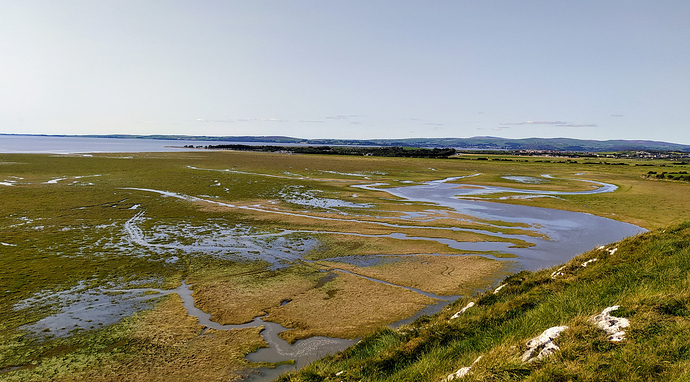 The airfield at Cark was very active where the skydivers were making the most of the excellent weather.

Brooke fell asleep on the grass in the sunshine for half and hour or so, I forgot what an absolute luxury that is - given that these days I seen to be hell-bent on making the most of the time I have left on this planet!

I setup the HF antenna and rollup SlimG from Spectrum Communications and set to work. I figured HF might give the option of Northerly chasers to get this most Southerly summit in the log and was pleasantly surprised - given the lack of notice - to get Geoff @GM4WHA and Mike @2E0IKM in the log. Douggie @G7CDA was doing well with his AMPRO 80m dipole setup - just goes to prove it is the antenna that you get the contact on that is the most important one!

Apart from managing to get both shoes in a fresh cowpat it was a very pleasant activation. There were plenty of Wainwright baggers in transit, as well as the odd family stroll, but only one question about contacting aliens to field this time round.

We descended via the longer but more gradual route to the North along the ridgeline of the head, and the walk back along the road to the car park was made more interesting by the blackberries to be had! We ended up in Cartmel for afternoon tea, only 10 minutes drive away, and can certainly recommend The Mallard Tea Shop for their wonderful food and cakes!

Definitely a good WOTA for the whole family, there is enough here to keep the kids entertained for a while on a nice day. 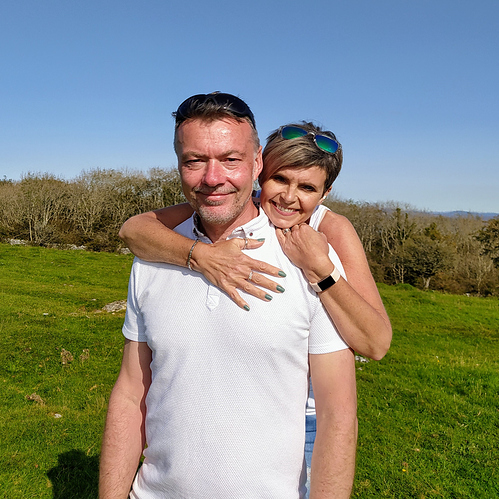 Really surprised to get you on HF Mike, although not sure why - maybe because I still don’t have an HF antenna up where I live? It’s doing me no good sat in the box under my desk, that’s for sure. Glad I took the HF to help out with chasing from the North.

Thank you for doing 80m on Humphrey Head. It was chance i saw your spot and was able to work you on my very in efficient hf setup! That summit as well as most of the Outlyers in the south of the county are impossible to work for me on 2m. In fact i have only worked Humphrey Head twice before and that was on 2m .

Were you operating near the trig point as i collect trig points. I think you have to be within 30m of it.

I am planning to get out this Sunday (27th Sept) with Reg 2E0LDF and my plan is to do Ullock Pike, Long Side, Carl Side and Dodd weather permitting. If weather bad i will probably do both Watch Hill summits.

Hi Geoff, it’s a pleasure to operate on HF when I can as it also gives those further afield the opportunity to be involved. However, I really do need to get better at given folk notice!

I was probably about 6 meters away from the trig point, so no issues there!
Hope to work you on Sunday, hopefully S2S!